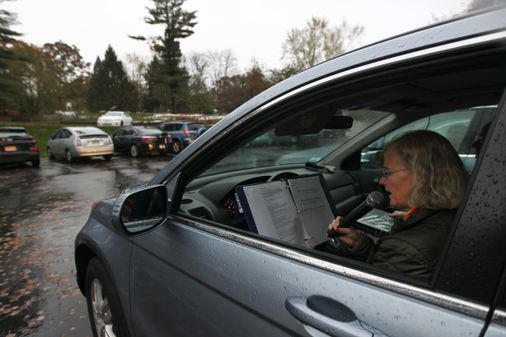 Wireless microphones were mixed live on a soundboard, then broadcast over an open FM radio frequency, which choir members and worshipers tuned their car radios to. An organ part that Lane recorded the day before – to free up his hands for conducting – was also mixed in.

At the top of a hill in the lot, the driver stood under a canopy lit by fluorescent lights, watching about 40 cars filled with songs, about half with members of the choir. Outside, the hum of about twenty singers rose from their cars above the din of the rain.

“We’re making this up as we go along,” Lane said. But he credited a Marlborough couple with creating a roadmap to put in place a pandemic-safe method of bringing his choir together with in-person singing, which required around $5,000 in new equipment.

“We tried to find a way so that people could sing together but not be able to exchange sprays,” said Kathryn Denney, 47, singer and former music teacher, referring to the risk of spreading the coronavirus.

After removing a calendar covered in cancellations from the wall in the spring, Denney and her husband began a series of experiments in their driveway to solve a new problem: could singers get together to do live music again in safely while the pandemic raged?

They posted their methods, which they call Driveway Choir, for free online so singing groups could safely meet, including the St. Anne’s Choir, which they used for a test of the final setup.

“Bringing people together and connecting feels like what people should be doing right now,” Denney said.

Sandy Creighton, an 80-year-old bass-baritone singer, and his wife, 77-year-old alto Elizabeth Creighton, understand why coming together to make music is so important.

In a phone interview before the service, Sandy Creighton recalled that choir music “saved my life”.

“I came back from Vietnam a lost soul,” said Creighton, a military veteran. Friends and comrades committed suicide; Creighton continued to be coached in choir practice by his wife, he said.

“Music taught me to feel again and to learn to cry,” said Creighton, a Lincoln resident who has been a member of St. Anne’s Choir since 1971.

Now the couple have taken on the new challenge of performing from the driver’s seat.

“You really need three hands,” said Elizabeth Creighton. “One hand holds the mic, the other holds the music, and the third turns the pages,” she joked.

There are also musical challenges, they said. “Elizabeth really can’t carry one melody without the others, and I’m just an iota above,” her husband said, evenly. The two had to develop the confidence to sing along with their section mates an SUV away.

And they’ve come to find joy in “precious moments,” like when the choir takes a restroom break and can see each other from afar as they run to use church facilities, said the couple laughing.

All this reminds that a choir is more than just a singing group, explained their leader.

“A choir director is the leader of a small community, so I do my best to make…a community feel like a community,” Lane said.

“So we’re getting together and doing something we all love and it’s a step back to a normal world.”

As night fell on the church and rain fell on Sunday, their voices again joined in song:

“The voice of prayer is never silent,” they sang. “Nor does the pressure of praise die.

Lucas Phillips can be contacted at [email protected]