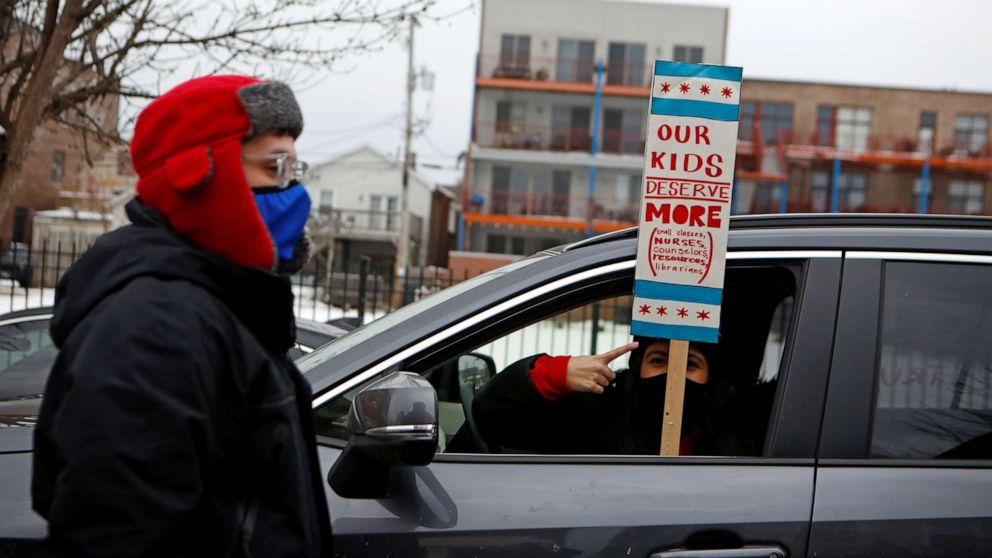 The school district and teachers’ union failed to come to an agreement.

Chicago teachers have been urged to return to classrooms starting Monday as the teachers’ union continues to fight back to in-person learning due to health concerns amid the COVID-19 pandemic.

If teachers do not have “approved accommodation,” they should return to class, Chicago Mayor Lori Lightfoot said on Sunday.

“In order to give teachers the opportunity to prepare for students, we say to parents, ‘come back and bring your kids to school on Tuesday,'” Lightfoot said at a press conference.

As for teachers not reporting, “we’re going to have to take action,” Lightfoot said, adding that distance learning has failed for students in the city.

Teachers have been engaged in collective action to stay at bay since January. The union said its members viewed the Chicago Public School Safety Plan (CPS) as inadequate.

In a letter shared with “GMA,” which was sent by Chicago Public Schools CEO Janice Jackson to families and staff regarding the reopening, CPS said in-person instruction would now take place on February 2.

Jackson said if teachers and staff do not show up for school on Monday, their access to Google suites will be cut off at the end of the working day.

“We are doing this because this is one step in a long plan on our road to reopen our school safely and at some point get back to normal,” Jackson said.

Lightfoot reiterated Chicago’s schools are “safe” and urged the teachers’ union to strike a deal. The two sides have met 70 times since June to reach an agreement on learning at school.

The mayor also highlighted the tens of millions of dollars the CPS has invested in safety measures, including PPE, health exams, temperature checks, hand sanitization and adequate ventilation.

“Our schools are safe,” said Lightfoot. “We know this because we have studied what has happened in other school systems in our city – over 40,000 Archdiocese, Charter and other public schools that have had some form of in-person learning since then. ‘autumn.”

CPS, the third largest district in the country serving about 341,000 students in 638 schools, wanted 10,000 educators to return to school buildings in late January for in-person learning by February 1. CPS has since amended the return several times in accordance with the teachers’ union. Due to the pandemic, CPS turned to full-time online education last March.

A number of charter school networks in the district have chosen to stay away until at least April, when they said there will be wider access to vaccines, according to the union.

As essential workers, teachers at CPS are all eligible to receive the COVID-19 vaccine. They shouldn’t start receiving injections until mid-February, CPS and Chicago Department of Public Health announced on January 22.

Union members contested with Lightfoot’s insistence on reopening classrooms without vaccinating educators by February 1, regardless of the risk to staff and students from the pandemic.

The union said on Sunday that if the CPS locks educators out, its next step will be to call its chamber of delegates, ABC News Chicago affiliate WLS reported.

A union representative told “GMA” in January that educators who did not defiantly return to school buildings last month were banned from their emails, their telecommuting system, and were likely paid at the dock.

Lightfoot did not say if there would be disciplinary action beyond the lockout.