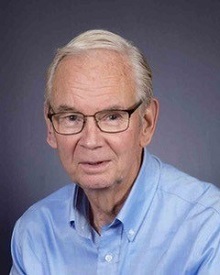 Mr. Nielsen was born on October 15, 1938 in Brooklyn, New York, to the late Herman Emil Nielsen and Evelyn Ottersen Nielsen, both of whom immigrated from Norway. He obtained a bachelor’s and master’s degree in electrical engineering from Rensselaer Polytechnic Institute. He worked for IBM for 34 years as CTO in Poughkeepsie, New York.

For nearly 40 years he had a vacation home in the Adirondack Mountains, where he had longtime friends and enjoyed the Camp of the Woods ministries. In 2004 he and his wife retired to Southport, where he was active in his church, attended several Bible studies and sang in the choir. He enjoyed boating, skiing and being a handyman around the house. He also loved to give advice! He had strong faith in God and was a true family man.

A celebration of her life will take place at 11 a.m. on Saturday, June 19 at Trinity United Methodist Church, Southport.

Share your condolences online with the family at Peacock-Newnam & White Funeral and Cremation Service.