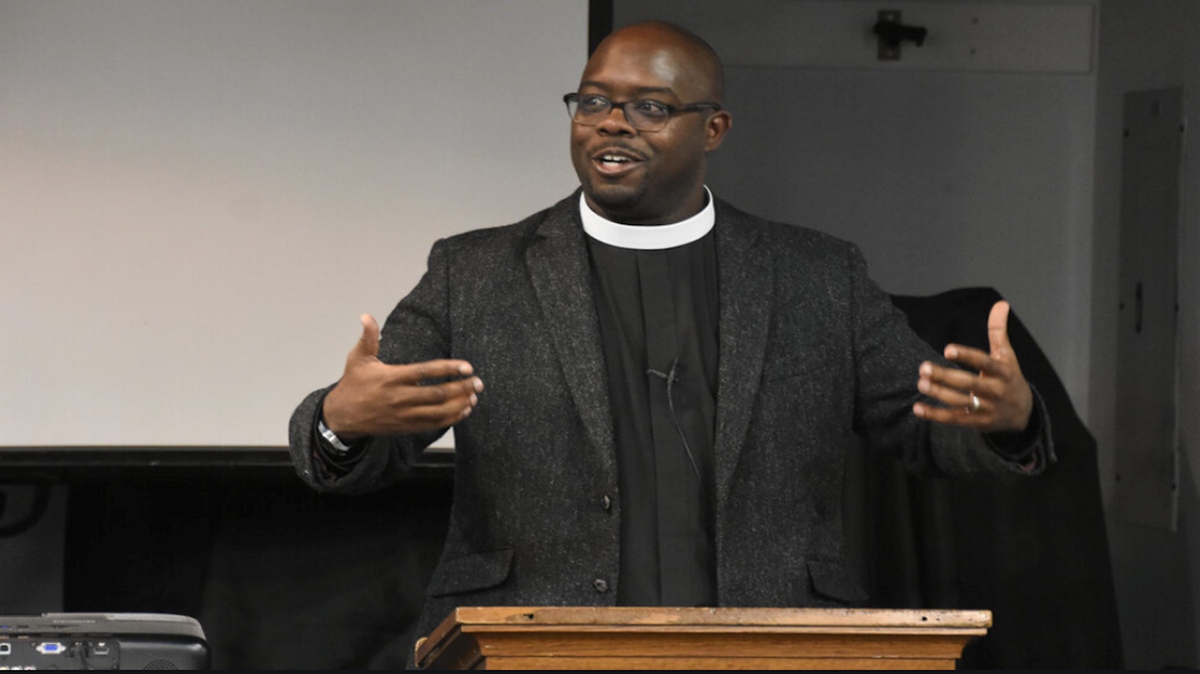 Esau McCaulley is Assistant Professor of the New Testament at Wheaton College. This interview revolves around his much talked about book, Read in black.

Moore: What was the major impetus for writing this book?

Mccaulley : I just wanted to write a book that took seriously the historical testimony of Bible reading in the African American Christian tradition. I want to argue that this tradition had something relevant to say for the present moment. As I was finishing my doctoral program in 2016, there was so much turmoil and injustice. I wanted to argue that the Old and New Testament scriptures could meet the hopes and needs of African Americans.

I was also really fed up with reading Bible study books that seemed so detached from the experiences of black Christians. I wanted to write something that took the Bible seriously as the word of God on the one hand and the particular concerns of the black community on the other. I wanted to show that you don’t have to throw away the Bible to talk about systemic injustice.

Moore: Many Christians I know (and Americans) use politics, politicization, and politics in totally negative ways. These are shortcuts for wicked, corrupted power games with worldly machinations that Christians are wise to avoid. You do a wonderful job of showing that reading the Bible responsibly has all kinds of implications, including things that relate to the so-called political sphere. Why do most Bible readers miss this connection?

McCaulley: I think there is a big difference between asserting the authority of the scriptures and taking all scriptures seriously when considering Christian witness to the watching world. In other words, what Scripture says about injustice, the poor and the stranger is just as inspired as what it says about personal holiness. Too often we have trained ourselves to believe that being faithful to the gospel means focusing on a narrow set of issues, but when we remove the blinders we can see that the scriptures and Christian tradition address a variety of topics. We are not trying to establish the kingdom in this country or any country, but we can be clear about the ways in which our contexts fail to embody the future of God. What I have in mind is reclaiming the prophetic role of the church.

Moore: Western Christians know how to cry but are not clear or uncomfortable about lamenting. I recently taught a group of students through the life-giving book of Lamentations. Almost all of these university students are of evangelical origin, but they all told me that they had never heard the Lamentations preached in their churches. Why the lack of attention to lamentations as they permeate the Bible?

McCaulley: I think it depends on your location. The black context knows very well how to lament. Many of our artists have historically varied from blues to gospel and R&B during the same career. Many of our gospel songs are lamentations. I think we’re more comfortable with Lamentations because we own the broken pieces of this land in a way that others don’t. In other words, we don’t have an idealistic image of life as mere abundance. Unfortunately, we are well aware of the suffering that takes place here. Sometimes an image of American exceptionalism bleeds into the life of the church, and people focus more on triumph than triumph in the midst of suffering and loss.

Moore: It is one thing to lament. Lamenting with hope is quite a different thing. What does it look like, especially when there is so much injustice? In other words, how to keep hope linked to realism and not fall prey to cynicism?

McCaulley: Christian hope is not simply a wish for a better future which may or may not actually improve. Christian hope is rooted in the resurrection. I have hope because I believe that Christ is risen. In other words, when I am tempted to fall into cynicism, I have asked the most important question: Is the tomb empty? One more thing, perhaps the most important thing. Sometimes when I border on despair, I find myself interrupted by joy. I think it’s from the Holy Spirit. Ultimately, I trust God will take care of his people. However, I also know that Paul said that we can only reign with Christ if we suffer with him. Therefore, I know that in this world there will always be those who will oppose the purposes of God, but I trust that he who has conquered death will ultimately be victorious.

Moore: Your book does a great job of demonstrating the constant temptation to prioritize certain Bible truths and avoid or diminish other truths. Tell us how you are careful not to be selective in understanding and applying the scriptures?

McCaulley: I try to be aware of the ways in which my context both helps and hinders my scripture readings. So it is good news that the church spans time and space. I try to listen to voices from the past and to contemporary voices that can see things that I can’t. I’m convinced that we need the whole church, reading the whole bible, to discern the mind of Christ together.

Moore: It is clear throughout your book that you are committed to reading the scriptures carefully and attentively. Your belief that Christianity is true is also clear and irresistible. Has there ever been a time when you felt the need to give up the Christian faith for another religion or philosophy?

McCaulley: Yes, I spoke about it briefly in chapter four. There was a time when I wondered if those who claimed that Christianity was the religion of a “white man” were right. It was a time very similar to the one we live in now, where African Americans felt harassed on all sides with very little help from fellow believers. It was the beauty and the truth of Christianity, the person of Christ, that carried me through this season.

Moore: What are the two or three things that you hope readers will get from your book?

McCaulley: I pray that people will be inspired to continue to look to the Bible for hope. I hope people begin to appreciate the legacy of African American Bible interpretation and our broader Christian witness as a gift to the church and to the world.

David George Moore is the author of the next Stuck in the Present: How History Liberates and Shapes Christians (Leafwood / Abilene Christian University Press). Some of Dave’s teaching videos and his contact details are available at www.mooreengaging.com.