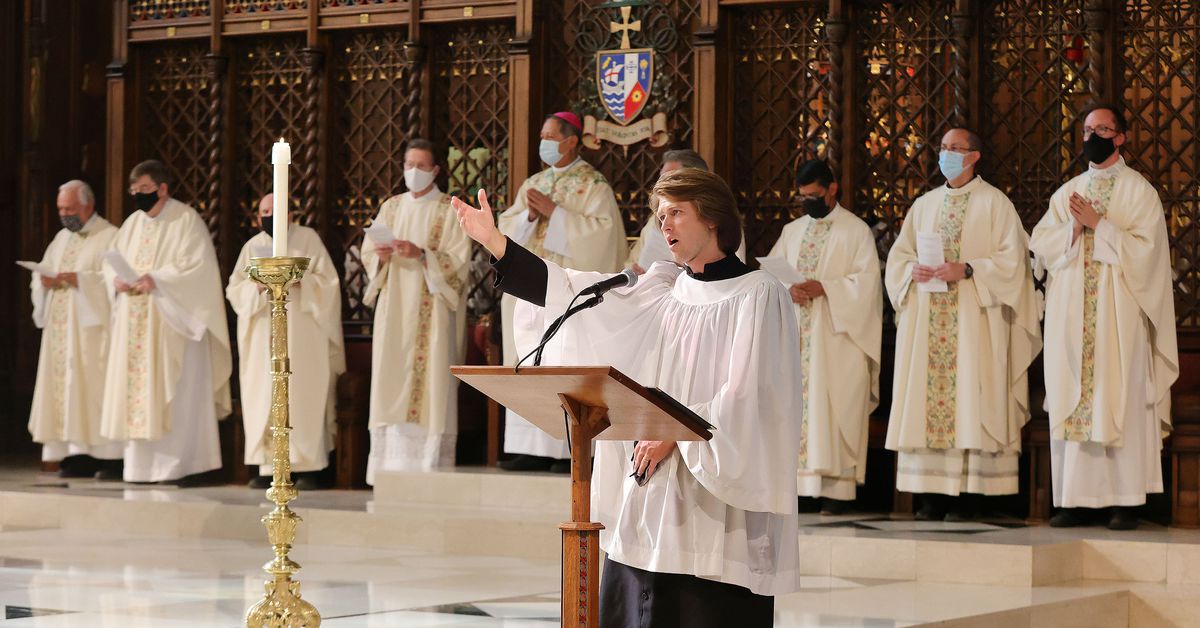 John Richardson was in his sophomore year at Brigham Young University in Provo, Utah, when he auditioned for several choirs and bands. He was fired by everyone.

Despite his disappointment, the aspiring singer found hope in a teacher’s suggestion to take singing lessons.

To fund the lessons, it took serious advocacy with his father, but Richardson won and quickly discovered a talent and passion for singing.

Over the past year or so, the 24-year-old has started living his dream and he rejoices over a person’s reaction when he tells him about his unique job.

Double takes and puzzled expressions are common when the active Latter-day Saint explains that he is employed as a cantor who sings sacred liturgical music at the Cathedral of the Magdalen in Salt Lake City – not exactly college student work typical. “Wait, wait, wait,” most people say, “tell me about this.”

“It always catches people off guard,” the 24-year-old said with a broad smile.

What is a cantor?

A cantor of Madeleine Cathedral is a paid professional singer who leads the congregation in worship through music. Richardson was hired in May 2020 and is one of four adult cantors at the cathedral, where he sings two Masses every alternate weekend, including Spanish Masses, as well as weddings, funerals and more. events.

Not only did the experience advance his chosen career path, it also strengthened Richardson’s faith as a member of The Church of Jesus Christ of Latter-day Saints.

How he got the job and why he’s passionate about it is an interesting story.

Richardson’s musical roots begin with his father, an organist who trained at BYU with Tabernacle Choir at Temple Square organist Richard Elliott.

Richardson’s father would often tour a symphony while the family took care of the Saturday household chores and encouraged his children to “pay attention to the music and see what’s going on,” his son said.

“It was my Saturday routine,” said Richardson. “So I started listening to classical music with my parents and I got that appreciation. From an early age I could tell that choral music was my special love. I was drawn to it.

Richardson said he was “forced” to take piano lessons in his youth. In his first year at BYU, he took organ lessons because his father was willing to pay for them. But it was not his passion.

What Richardson loved was listening to music. He paid $ 30 for the BYU School of Music pass and attended almost every concert on campus. The more he watched and listened to the choirs, the more he wanted to play with them.

After auditioning for the BYU Men’s Chorus, Richardson said director Rosalind Hall must have detected raw ability because she recommended he take singing lessons.

Richardson begged his father to let him go from organ lessons to singing lessons. “I know you said you would only pay for organ lessons and whatever I should pay for myself, but that I would just pay for a semester of voice lessons,” the student said.

His father agreed and Richardson seized the opportunity, training for an hour and a half each day when he was only asked to practice for 30 minutes. While he was playing the organ, he felt like he was banging his head against the wall, time flowing by when he sang. The change was “magical”.

“Honestly, that’s what changed everything,” said Richardson. “It’s amazing how much training helps. It’s not that they have all these hidden secrets – I could have searched the internet for it – but it’s someone who helps you figure out what’s going on with your own voice. People … choose to make music because it’s magic. I found that magic in the voice.

Richardson’s passion for music was heightened when he attended a study abroad program at Cambridge University in the summer of 2018. During his stay he visited many historic Gothic-style chapels and listened to some of the world’s most renowned choirs. He was captivated by the ambiance of religious history, architecture, works of art and illuminated candles as he listened to liturgical and religious music. He came home with a new goal.

“I have to figure out how I can do this,” he said.

Richardson was back at BYU in early 2020 when he received an email with a job offer for a cantor at Madeleine Cathedral in Salt Lake City.

This was the opportunity Richardson had been waiting for, and although he was unfamiliar with Catholic rituals and music, he immediately requested an audition with Gabriele Terrone, assistant music director and cathedral organist.

When the cathedral has a cantor opening, Terrone informs a list of vocal teachers and college choral program directors along the Wasatch front. Two or three candidates are invited to audition, with the best candidate receiving a test on the weekend.

Applicants are not required to be members of the Catholic Church. A cantor is hired based on his singing abilities and musical skills. Terrone has hired Latter-day Saint cantors in the past.

“We welcome singers from all over,” Terrone said.

Richardson thought he botched his audition and was delighted to receive a callback from Terrone. He survived the weekend trial, accepting plenty of teaching time, and was offered the job.

It took several weeks to learn the movements and understand the Roman Catholic liturgy, but Richardson made the most of his opportunity. He even used the Spanish language skills he learned as a Latter-day Saint missionary in Quito, Ecuador, while performing in Spanish masses.

“I am and will be a faithful member of The Church of Jesus Christ of Latter-day Saints all my life. But I am very open to anything that will bring me spirit and teach me about Jesus Christ. … Even when I can’t go to my own church meetings, I can come here to a place of holiness and feel closer to God. – John Richardson

Most of Richardson’s Latter-day Saint friends and family supported his new job while others were unsure of what to think of him, sometimes missing the worship services of his own faith to work on the Sabbath and perform. for followers of another religion.

“It escapes them,” he said with a smile.

But the whole cathedral experience – donning a robe, singing sacred music to the sound of a beating organ, surrounded by stained glass windows and religious artwork – greatly strengthened Richardson’s faith in Jesus Christ. It taught him something about the meaning of being a true Christian and helped him feel more love for a global Christian community.

“I am a faithful member of The Church of Jesus Christ of Latter-day Saints and will be so all my life,” he said. “But I’m very open to anything that will bring me spirit and teach me about Jesus Christ. … Even when I can’t go to my own church meetings, I can come here to a place of holiness and feel closer to God.

After all this, Richardson’s singing days at Madeleine Cathedral are numbered.

Richardson graduated from BYU in April. He and his wife will travel to England in September where he will earn an MA in History at the University of Oxford with a scholarship to sing in the Queen’s College Choir.

He will miss the solos sung in the cathedral and the resonant sound produced in the large acoustic space. But he’s also excited for the next leg of his musical journey.

“As much as I enjoyed being a cantor, being a member of an ensemble will make me very happy,” said Richardson.