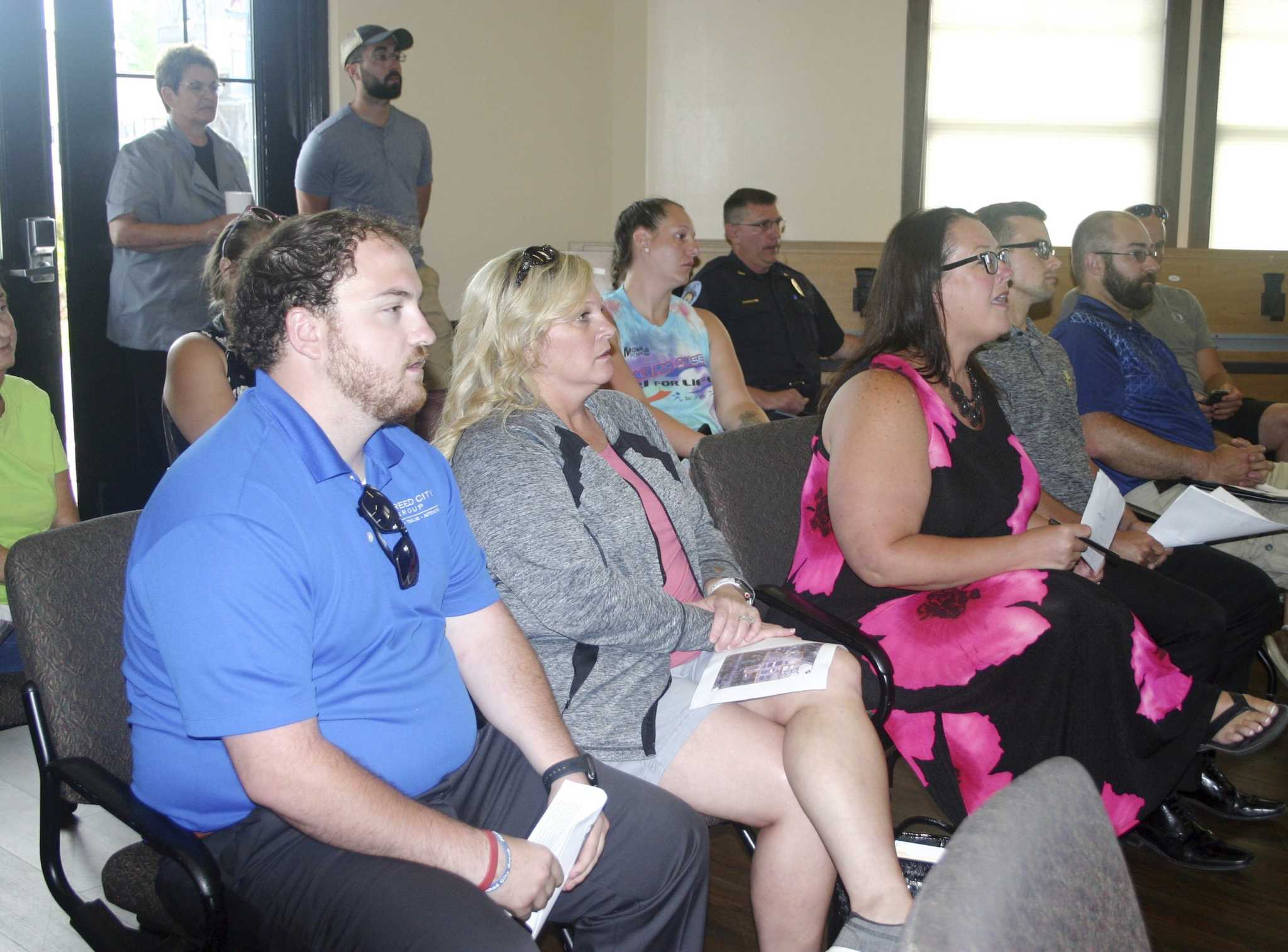 REED CITY – Reed City needs to grow as a community, residents and business owners said at a recent town hall, and to do that, creating a social neighborhood would be a beneficial start.

Reed City City Council held a special meeting on June 8 to hear the public’s thoughts on creating a social district in the city center.

Overwhelmingly, the public response was in favor of going ahead with the proposal.

Several local business owners told the council it would be good for the city and bring more visitors to the city center and promote local businesses.

Deanna Murphy, of Reed City Brewing Company, said she supports the social district because the city needs to grow.

“We have the potential, we have to take it to the next level,” Murphy said. “Fifty percent of our business is out of town, and we have people asking what they can do in town. We need to have more events.

“We have to bring people in, and we have to keep them here and make them spend money,” she continued. “The only way for us to do that is to open things up. If we can have this (the social district) in our back pocket, and I think that would be beneficial.

Deb Ahlich-Remus, chamber member and owner of Pere Marquette Bistro, agreed. She said the city needs to grow and the social district would be one way to help.

“I support this because I think anything we can do to bring more people, to bring more business, to the city is a good thing,” Ahlich-Remus said. “The trail is a big draw for this community. The Deposit is a big draw. I’ve been with Crossroads Celebration since 1990, and it brings a lot of people to town, but we have to grow. “

Even though she doesn’t have a liquor license, she would be in favor of the social district bringing people to town, she added.

Jesse Kailing, owner of Sunny’s Bar and Grill, said he’s more concerned with bringing people into the city than any potential negative impact from the social district.

“I’m not concerned about a lot of sidewalk craziness,” Kailing said. “As business owners, we are going to be responsible for monitoring people who take drinks, no different from those who have too many inside the establishment.

“I’m more concerned with bringing more people to the city,” he continued. “I believe if we open the streets to socializing, people will come and bring more business downtown. The social district could open up opportunities to have events that could benefit other businesses and not just bars. “

The Board of Directors of the Reed City Chamber of Commerce also supported this effort.

“On behalf of the board, I want to say that we support this,” said Tricia Worth, board member. “I think there is more development that needs to be done, but the initial start is getting state approval.”

“If we get it approved on a larger scale, the city will have the control to scale it down on a smaller scale, so let’s refine it and make it work,” she added.

Other residents also spoke in favor of the social district, saying it was an important step in promoting the city’s growth.

Resident Stew Thompson said he supports the Social Quarter because in traveling to many other social areas across the state he saw only good things happening.

“There seems to be the misconception that this is just an outdoor party,” Thompson said. “It’s not. It’s about extended outdoor seating and the ability to have a drink from one place to another because the sidewalks are open there.

“Right now, with our pre-ban open container laws, I can buy soda and food at Reed City Brewing and walk down the street to sit and eat it with no problem, but if I buy a beer and food, I can’t. It seems a bit absurd as an adult adult who doesn’t have the freedom to do this. This social district responds to this problem.

Thompson went on to say that the key to solving the COVID-19 problem of reduced capacity was to allow customers a safe outdoor space to eat and drink, which has allowed many businesses to recoup lost revenue.

“Customers have shown that they love this outdoor atmosphere,” he continued. “They love this freedom of movement to enjoy their food, drink and family.

Many people’s concerns, he added, are addressed by municipal ordinances already in effect.

“I think it’s a tool that we can provide to businesses,” Saladin said. “They might not want anything to do with it and it’s their choice, but by establishing it you have a tool to use to create programs that can help this community grow. We need to step away and let the businesses do what they are doing, and maybe more storefronts will open as people will see there is a lot of foot traffic downtown.

“It’s about social interaction, talking to our neighbors, building those relationships,” he continued. “That’s what it promotes.”

However, not all participants were in favor of the proposal.

Lyndsey Eccles Burchette told council she understands the purpose of creating the social district was to promote tourism, but she didn’t see that happen.

“The only public attraction I see is the ability to legally drink open alcohol on the sidewalk,” she said. “This is not likely to attract outside tourists, only those who already frequent the bars.”

Burchette also expressed concern that the necessary funding would come from taxpayer dollars.

“Other cities that have done this have relied heavily on financial support from the Chamber of Commerce or the Downtown Development Association,” she said.

“Reed City does not have a DDA and the House will not be able to help fund much, so where will the funds come from? ” she asked. “As a taxpayer, I do not agree that the project is funded from the general taxpayer income fund. If this is the case, then the taxpayers will subsidize the drinking places, since they are the ones who will benefit from the social district.

Rotary club member Brad Doornsbos said he has already donated $ 15,000 to local businesses this year and will continue to support them as soon as they can.

“I think it would increase foot traffic, not only to those who live here, but friends and family in outlying communities would now have the desire to enter, and all of a sudden, those storefronts that are empty, they can. start to think they can fill them up because now there is more foot traffic, ”he added.

Reed City School Board member Nate Vanderhoof said he was not condemning the social district in general, but agreed that it needed additional thinking and development in order to meet Reed City’s needs.

He went on to say that when board members make decisions, they should be able to identify how those decisions benefit the community in each of the four categories.

“I ask the city council to tell the community how the social district approaches these four categories,” he said. “How will it benefit economic development, support infrastructure, benefit schools or promote business development?” The proposed social district cannot, in its current form, answer the questions necessary for the development of the whole community.

Vanderhoof has come up with an alternative plan to close Upton Avenue from 5:00 p.m. on Friday until Sunday noon and let local restaurants who wish to participate sit outside for dinner.

“It wouldn’t cost the city anything,” he said. “You are using the space that is already available. It promotes a family atmosphere and increases the capacity of restaurants and bars.

“This example can answer, in a positive way, the questions that the board should answer in every decision it makes,” he added.

Some participants expressed concern about the closure of Upton Avenue for an extended period and the reduction in available downtown parking.

Mayor Roger Meinert explained that the proposal for the social district did not include the closure of Upton Avenue for the entire district.

“This is a misconception,” he said. “There may be events that require us to close Upton Avenue, but it might be once or twice a month. Upton Avenue will remain open unless there is a special event or activity. “

Meinert added that the proposal also included limited trial dates and times, which, if successful, could be extended.

“The consensus was that it would be 5 p.m. to 11 p.m. Thursday and Friday, noon to 11 p.m. Saturday and noon to 5 p.m. Sunday, and would run from Memorial Day to Labor Day,” said Meinert. “At this point it’s the second week of June and we haven’t applied yet, so in reality we’re several months away from that this year.”

Reed City Police Chief Chris Lockhart explained that the reason they decided on the limited dates and times was because he felt the Police Department would be best able to handle.

“I don’t dispute that it will be beneficial in attracting more people to the area,” Lockhart said. “If you look at the law, it indicates that the local governing body that promulgates the social district is responsible for maintaining the health and safety of the district. If this is to be enacted, we must be accountable to our community and our visitors to ensure that they are properly monitored. “

Meinert said the next step would be for city council to develop a more detailed plan and approve a motion for the social district that gives a more defined date range and opening hours.

When completed, they will apply to the state to enable.