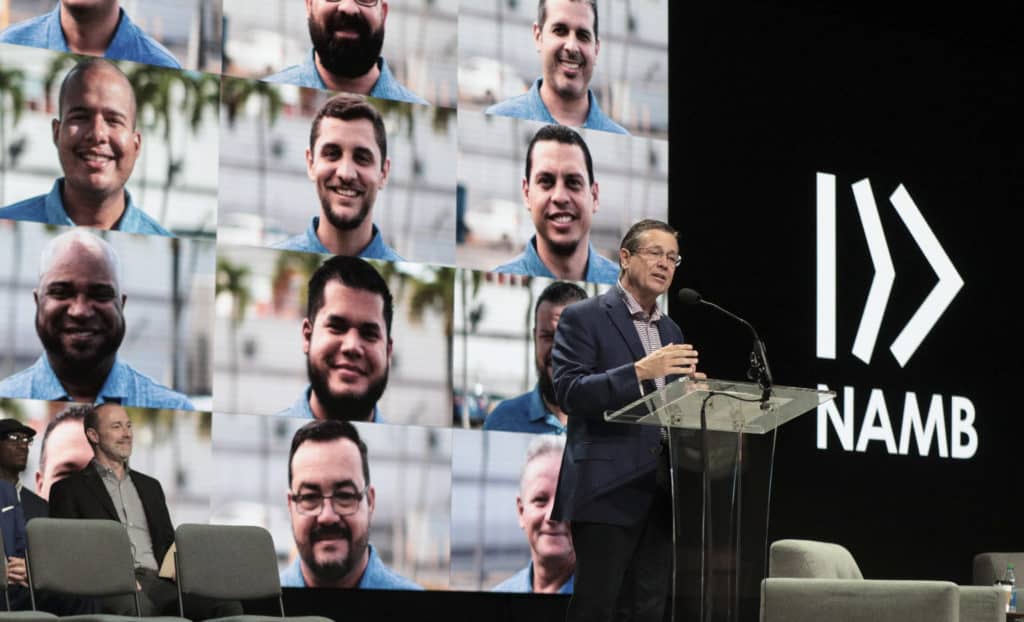 NASHVILLE (BP) – “It works,” said Kevin Ezell, Chairman of the North American Mission Board (NAMB), of NAMB’s strategy for reaching North America with the gospel. Since 2010, Southern Baptists have planted more than 8,200 churches.

As Ezell shared that number, a map of North America represented the success with dots representing places where churches have been planted over the past decade.

These churches, said Ezell, represent nearly 17% of all churches in the Southern Baptist Convention. Outside the South, church plantings account for nearly 19 percent of all baptisms reported in the SBC.

In Canada, 54 percent of all current Baptist churches have been planted since 2010, and more than half of the baptisms reported in Canada have been from these churches.

“At the North American Mission Board, everything we do is gospel-oriented,” Ezell said opening his presentation. “The Gospel is preeminent, and the Gospel unites.

Ezell outlined the vision that the NAMB implemented to share the gospel across North America through what he described as “a single and simple vision”.

“Planting churches to reach broken people – that’s Send Network. Transform Communities Through The Ministry Of Compassion – This Is Send Relief, ”Ezell said. “And to restore our neighbors by the power of the gospel – that is evangelism.”

Each dot on the map, Ezell pointed out, represented a face, the face of a church planting missionary. He showed portraits of church planters in Puerto Rico who represented 16 churches planted since 2016.

Puerto Rico “is a place where no SBC churches have been planted for twenty years,” Ezell said.

In Quebec, Ezell spoke about David Pothier, who founded La Chapelle in Montreal. In April 2021, his church baptized 17 people.

“Since David Pothier founded this church in 2013,” said Ezell, “they have baptized 649 people and partnered with NAMB to plant four churches so far, and one more is coming soon. “

After reporting on the success that Southern Baptists have experienced in church planting, Ezell emphasized the need that remained.

“There is a great need, but the need is as great today, if not greater than it was ten years ago,” Ezell said. “It is clear that there is still work to be done, but let us remember that NAMB does not plant churches. Churches plant churches.

The biggest challenge is the need for more qualified church planters, and NAMB aims to equip Southern Baptist churches. Recently, NAMB announced the launch of a resource and research group that will provide free materials to churches.

“We can and will continue efforts like this work to equip the planters, but the bottom line is that the planters come from the churches,” Ezell said. “They come from big churches, small churches, urban centers, suburbs and small towns. “

Of these planted churches, 60 percent were ethnic or multi-ethnic congregations, and Send Network recently completed translating all church planter materials into Spanish to better serve and contextualize Spanish-speaking missionaries.

“Our focus is less on the annual accounts, quite frankly,” Ezell said. “It’s more about equipping planted churches to start strong, evangelical, and healthy churches, and currently 80 percent of our churches are still active after 4 years. This is the target.

Ezell thanked the Southern Baptists on behalf of North American church planters for their faithful donation of $ 49.5 million to Annie Armstrong’s Easter offering, a substantial amount given COVID-19 hit during the season when Southern Baptists generally give the offering.

As part of his emphasis on the importance of one, Ezell shared the story of Chris Carrier, a man who was left for dead as a young boy after his attacker kidnapped him and shot him in the head.

After six days spent unconscious in the Everglades, Carrier was discovered and eventually recovered, and as an adult he was given the opportunity to lead his attacker to Christ while the man was on his deathbed.

When asked what it was like to talk and pray with his attacker, Carrier had only one word for it: “clumsy.”

“It was just two men in the awkwardness of our reunion and our found friendship, seeking grace and the presence of God in this room,” Carrier said.

Before Ezell’s report, Johnny Hunt, NAMB’s senior vice president for evangelism and leadership, shared a report on Crossover and the results of the evangelism movement called Who’s Your One.

During Crossover Evangelism Week leading up to the annual meeting in Nashville, volunteers reported 6,300 evangelistic conversations and 176 greetings.

Of 27 stops on the Who’s Your One tour, more than 13,000 people attended the Sunday evening gatherings while more than 5,000 attended the Monday morning evangelistic trainings.

“I joined the North American Mission Board two years ago, and have found evangelism to be at the heart of everything we do,” Hunt said. “I am thankful to God for the Christ-honoring leadership of our president, Kevin Ezell. Whether through Send Relief, Send Network, evangelism or pastoral leadership, everything revolves around the Gospel.

After the presentation and report, the floor was opened to messengers from the SBC Annual Meeting to ask questions of Ezell and NAMB.

The first question came from Joey Hufstedler, messenger and pastor of Poplar Grove Baptist Church in Trenton, Tenn., Who asked to see the salary structure of NAMB. Since the question was about NAMB salaries, Ezell referred the answer back to NAMB board chairman Eric Thomas, senior pastor at First Baptist Church in Norfolk, Virginia.

“The North American Mission Board, the board of directors, has established proper procedures for limited access to compensation information,” Thomas said. “And we will answer any questions about this information on a case-by-case basis. “

Dave Van Bebber, messenger and pastor of First Baptist Church Buffalo, Missouri, asked if the NAMB training material included information on “the immediate end of abortion without exception or compromise”.

Ezell said he was against abortion and that NAMB trains and equips planters in the areas of theology and application in church planting. Ezell also said abortion was not specifically mentioned in the training materials. NAMB approved planters, however, are required to adopt the Baptist 2000 Faith and Message, which includes language supporting the protection of unborn human life.

A final question came from Jon Bullock, a messenger who is on staff at The Island Chapel in Tierra Verde, Fla., Led by Will McRaney, who asked about money being spent to lobby the federal government in Send Relief name.

Ezell said he couldn’t remember specific details at this time. However, this information is provided below in a statement from the NAMB:

The role of local, state and federal governments is essential in disaster response and coordination. This is especially true with the role of FEMA.

As FEMA continued to impose more regulations on organizations that could participate in recovery efforts, Send Relief spent an average of $ 149,000 per year for four years on Nickles Group counseling in Washington, DC. officials and members of Congress as they and we sought to serve those affected by storms, tornadoes, floods and earthquakes.

One of the many outcomes was a memorandum of understanding that formalized the relationship between Send Relief and FEMA, allowing NAMB to have appropriate representation at the National Response Control Center (NRCC) during ongoing crises. Without such representation, Southern Baptists would not have been able to immediately access partner organizations to minister in natural disasters.

Additionally, we were successful in helping to amend the National Disaster Law, which now allows FEMA to work directly with a broader group of nonprofit disaster relief organizations, such as Send Relief and Southern Baptist Disaster. Relief.

This relationship also helped to attract increased attention and expand the NAMB disaster recovery department in Puerto Rico, where Send Relief was one of the largest partners in FEMA’s Valor program. Through Valor, FEMA provided roofing materials and Send Relief provided volunteers to repair homes ravaged by storms and earthquakes on the island. This program, along with other in-kind donations, has generated over $ 1 million in support of the people of Puerto Rico, enabling Southern Baptists to effectively extend the reach of their compassionate ministry and to give through giving. through the cooperative program. Thanks to this work, NAMB was able to support 2,300 people with more livable houses. More broadly, Send Relief has served the needs of more than 24,000 people, and this relief work continues today.

The Nickles Group has registered as a lobbying firm on behalf of Send Relief, to ensure that all parties meet the letter of disclosure requirements. However, they helped the NAMB navigate government, not pressure it, as we sought to serve well.

Now, with even stronger relationships and intervention strategies, we no longer require the services of an outside company and we are confident in our ability to navigate agencies and public resources for case intervention. disaster.