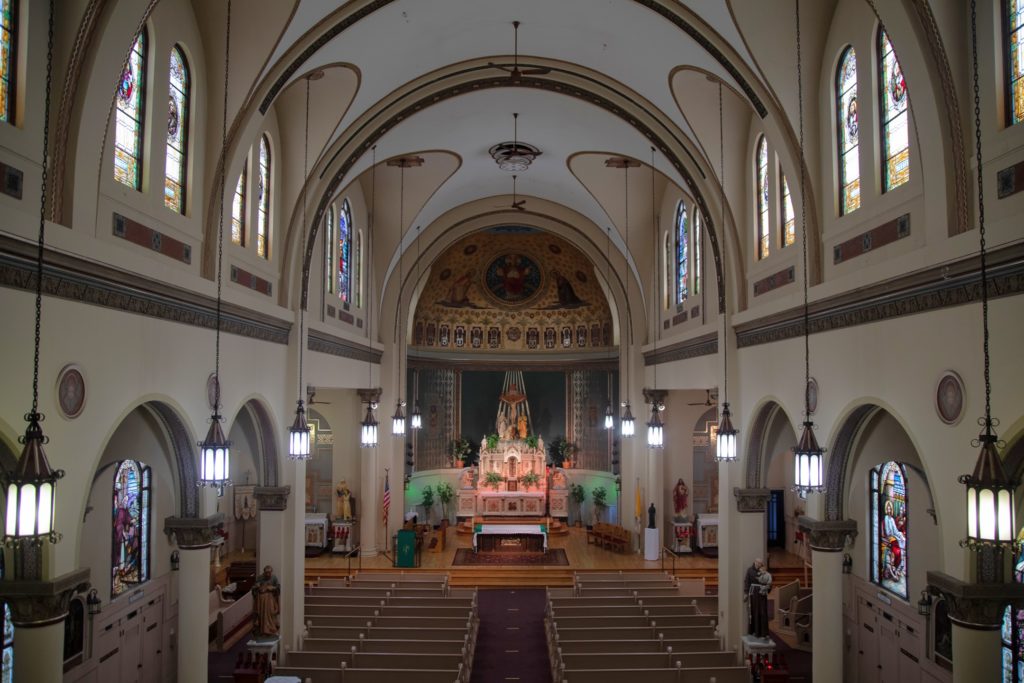 With the ownership of approximately 177 million acres of land, the Catholic Church is the largest non-governmental landowner in the world. But with all the financial advice from clergy and parishes not having the training and resources to properly use this property, Notre Dame alumnus David Murphy realized that the Church is missing out on opportunities all over the world to engage with its vast property to advance the Catholic mission.

Several dioceses across the country – such as Pittsburgh and Chicago – are contracting and merging parishes, said Murphy, now a Holy Cross seminarian. Murphy has partnered with the Fitzgerald Institute for Real Estate (FIRE) to explore how to help struggling parishes get the resources they need to use their property more effectively.

After graduating in 2014, Murphy eventually ended up in San Diego as a Navy helicopter pilot. While attending a local parish, he noticed that the Church had a lot of underutilized valuable property. Murphy addressed this problem by founding Quo Vadis, a non-profit organization that places young adults in Catholic properties to help revitalize parishes and make better use of the property.

Murphy’s work at Quo Vadis led him to connect with FIRE and begin to grapple with the problem of Church property. Murphy said the ability to consult with real estate experts at FIRE has proven invaluable, especially since he has no formal real estate experience.

“I would pick up the phone and have access to the alums [and] people who are industry experts in this area to kind of say, “Hey, I see that, why? “And they’d be like, ‘Oh, you know, here’s a great answer,'” Murphy said.

He called his role a “bridge builder” – he directs owners of Church-owned property to the appropriate channels where they can find people who have the resources and know-how to properly care for the property. .

“The role of FIRE is much more of a think tank,” Murphy said. “We would give the actual execution to the pastor with the people to make it the action part. “

To do this, Murphy has developed a database with examples of possibilities for transforming a property. He said those possibilities in the “playbook” include turning vacant or new properties into cafes, women’s shelters, retreat centers, young adult housing and more.

“We are only scratching the surface”: Ststudent team tackles school closures

During the winter term, Murphy led two teams of FIRE students in projects addressing Church property issues. Murphy helped sophomore Lauren Vallace and junior Josef Weber, as the students worked together to collect data from the National Catholic Educational Association (NCEA) to diagnose the reasons Catholic schools across the country are closing and make recommendations on how these properties can be reused and used more efficiently.

With almost no information on the reallocation of Catholic schools for public use, Vallace said Murphy gave him and Weber a lot of autonomy in deciding how to conduct the project.

“[Murphy] says’ This is your project. You find what interests you and you use it because we’re literally scratching the surface of it all – there’s no data on any of it, ”Vallace said.

One of the first people Vallace consulted was the pastor of his own local parish, St. Francis Xavier, as it had merged with another parish. She said her pastor put her in touch with the Archdiocese of Chicago’s director of real estate sales, which turned out to be a good starting point for Vallace.

Vallace and Weber began by going through the list of NCEA school closings and seeing if parishes had policies regarding who the property could be leased to.

“The majority of them literally had nothing on their website about it, and that’s when we really, at least me and Joseph, really realized that our work is critically needed in this. moment because once they reach that point [considering selling property] most of those dioceses have no idea what to do from there, ”Vallace said.

Vallace said this step was complex because if the property is used for a for-profit activity, it will lose its property tax exempt status. Additionally, she said parishes are tied to canon law, and selling a Church asset requires approval from several levels.

Vallace and Weber then conducted further interviews to help them create a document with a list of examples on how to reuse closed Catholic schools. After gathering data for their paper, Vallace and Weber began sharing ideas with the parish of South Bend St. Adalbert with the goal of eventually working on site at the parish.

“I think being able to be there and doing it in real time will really help us to revise [the data set] in every way possible and make it even more useful for everyone, ”Vallace said.

Vallace added that FIRE hopes to continue working with the Alliance for Catholic Education (ACE) to help Church leaders gain the access and resources needed to act on the data collected by Vallace, Weber and FIRE. .

“We’re in a unique position because Notre Dame is able to take on this huge leadership role and get the ball rolling with it,” Vallace said. “And you know we can make really quick progress in terms of how to solve the problem.”

The other team of FIRE students working on Murphy’s initiative over the winter break consisted of junior Hailey Maggelet and fifth-year architecture student Macartan Commers. The two students evaluated six Church properties in the Bronzeville neighborhood of Chicago.

Maggelet and Commers were tasked with developing recommendations for the parishes, telling them how to use the properties without selling them. They also ensured that the properties complied with zoning ordinances.

“And that sort of thing motivated a lot of our recommendations, just looking at what aligns with the Catholic Church, what is actually a viable option and how can we make it as inexpensive as possible,” said Maggelet.

In addition to remote work, Maggelet said another difficulty was that the old age of some churches posed structural problems, making it difficult to design new goals for buildings.

“A lot of these buildings were built in the early 1900s so they had a lot of structural issues,” she said.

However, Maggelet said one parish, Holy Angels, had a newer campus that allowed for more opportunities. As part of their recommendation for the property, Maggelet and Commers came up with the idea of ​​opening a thrift or resale store and installing solar panels on the roof of the school.

“We can reduce property maintenance costs and utility bills and you can actually make money with it. [the solar panels], and you don’t really have to do much about it, ”Maggelet said.

Other recommendations from the students included converting the St. Anselm Parish Convent into affordable housing and converting the vacant St. Ambrose Parish School into a trade school.

Maggelet said the winter break project was just the “tip of the iceberg” and she is excited about the future possibilities the initiative presents.

“I really see a potential for our work to go somewhere and have an impact on these different parishes that are really facing adversity and have pretty difficult monetary situations,” said Maggelet.