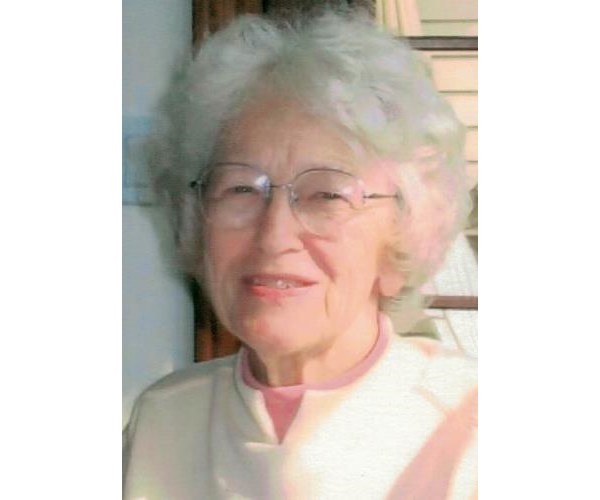 Services will be held on Wednesday, June 23, 2021 at 11:00 a.m. at the Southside Cemetery Mausoleum in Pontiac, Illinois with Pastor Carlin Bear officiating.

Born July 2, 1930 in Pontiac, Illinois, Geneviève was a daughter of Harry and Alverda (Street) Stang. She grew up in Pontiac; graduated from Pontiac Township High School with the Class of 1948 where she was a Class Officer as well as Salvatorian and active in groups such as Torch, National High School Honor Society, Yearbook, GAA and Future Homemakers Association. Member of the Lutheran Church of Pontiac, where she taught Sunday School and helped Bible schools. Genevieve attended Illinois State University where she obtained her bachelor’s degree in 1953 and her master’s degree in 1960. She taught full time with district 186 of Dubois Elementary School in Springfield, Illinois between 1953 and 1964 – including many years were devoted to teaching intermediate levels as well as “academically more capable” students. Between 1956 and 1963, she continued her education at institutions such as the University of Illinois, Northern Illinois University, and the University of Michigan before earning a doctorate. from the University of Minnesota in 1967.

Geneviève started a career at Bowling Green State University in 1967 and retired in 1995. She was regularly active in the Department of Education as an associate professor and devoted a great deal of time to professional organizations, research projects. and grants, academic council, advisory missions, as well as several non-university positions and committees, including the Faculty Senate.

Geneviève was an active member of honorary societies including Phi Kappa Phi, Phi Delta Kappa, Pi Lambda Theta, Kappa Delta Pi and Delta Kappa Gamma. She was a life member of the National Education Association. She is listed in Who’s Who in American Women of 1970.

She was predeceased by her parents; two brothers: (Harold and Jim) and two sisters: (LaDonna and Mary Shay Rogers).

Geneviève was an accomplished pianist, loved to knit, fly fish, travel and, of course, a passionate educator more than willing to help others. Until recently, her priority has always been to join her family during vacations and special occasions. Over the years, she has kept in close contact with her entire family as well as with former students and colleagues. In an era dominated by male college graduates, who also owned a home, she was always very proud of her accomplishments and encouraged others to follow the same path. She will be sorely missed.

Commemorations can be made at St. Jude Children’s Research Hospital, 501 St. Jude Place, Memphis, TN 38105 or at a charity of the donor’s choice.

Condolences to the family can be presented at www.calvertmemorial.com.