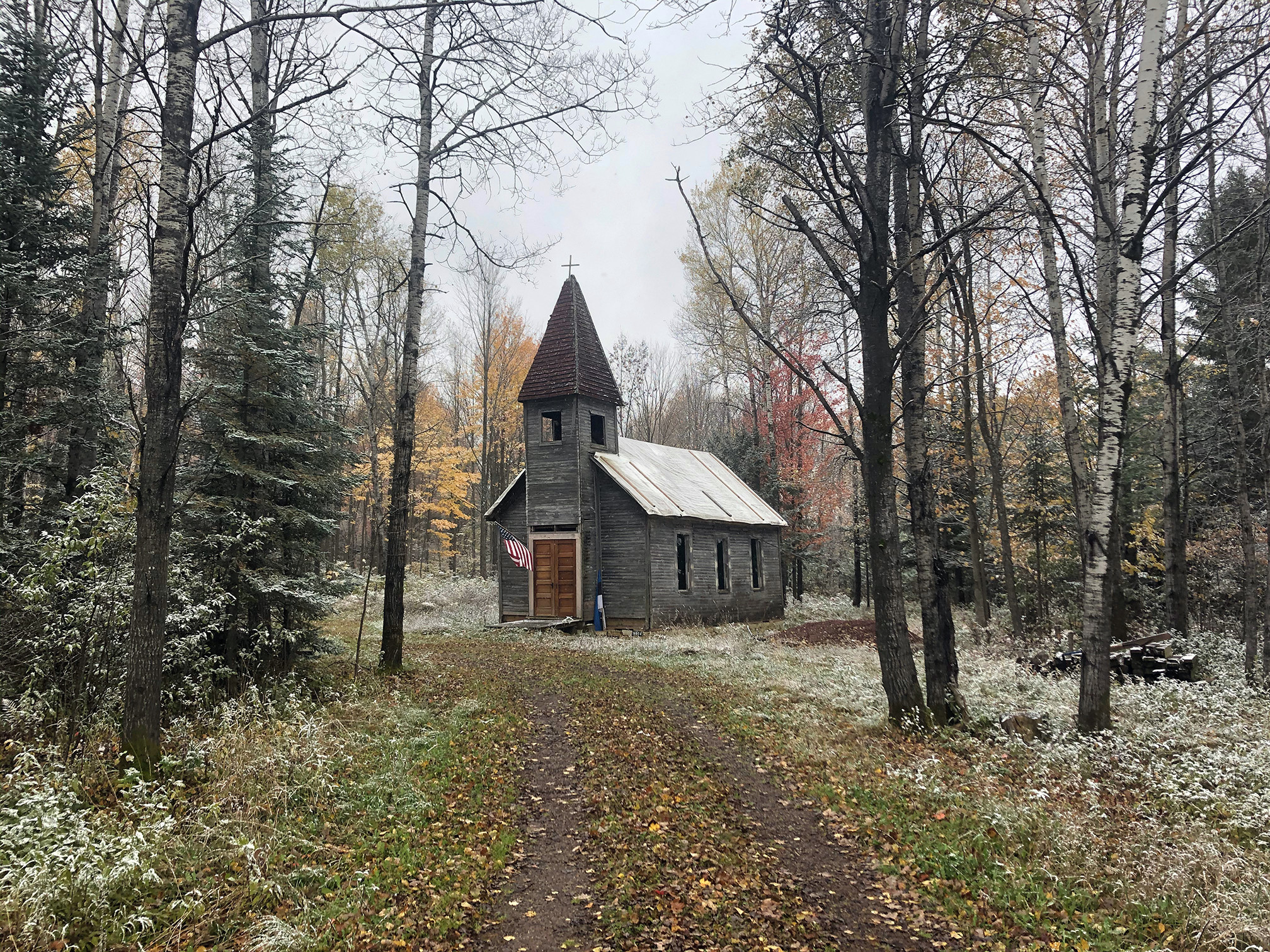 In the middle of the US state of Wisconsin, on the outskirts of a town called Gleason, almost in the middle of nowhere, stands a piece of history: a small Estonian Lutheran church that has been in existence for over a century; now it’s being restored, but it takes time, volunteers, and donations – all of which are hard to find.

The church is so isolated that if you didn’t know it was there, you wouldn’t find it. Even looking on Google Maps, the best thing that turns out is the Estonian Church Road – a narrow unpaved path that leads to the church from Lincoln County Road J. It is not visible from County Road. , but if you find the path unpaved, then you are greeted by a large sign reading: “Estonian Evangelical Church Martin Luther.” Founded July 16, 1914.

According to the church’s website, the first Estonian and Latvian immigrants to America chose the Gleason area of ​​Wisconsin because it looked like the countryside of their home country. This is also true of Finns, Swedes, Norwegians and Danes – many people in Wisconsin, but also Minnesota and Michigan, are descendants of Scandinavians.

Plans to build a church for local Estonians had already started before 1907. The community bought a small piece of land – 3.5 acres or 1.4 hectares – and the church that still stands today was built.

After a while, however, the Estonian community in Lincoln County declined and the church was abandoned at some point. Then, in 1964, Estonian director Bill Rebane, and his family moved to Lincoln Country from Chicago, unaware that the Gleason area was once an Estonian settlement. In the mid-1970s, Rebane became aware of the church, only to find that by that time it had been vandalized – the bell, pulpit, and furniture were gone.

In 1992, after numerous attempts to restore furniture, doors, windows, and maintain fences, Bill Rebane and his family retained a lawyer and filed reorganization documents with the county, reestablishing the church. in “the Estonian Evangelical Martin Luther Church” to become a landmark for Estonians in America and all those who had to leave their homeland to escape communism and religious repression, says the church’s website.

Restoration efforts continue to this day. And, surprisingly, these efforts are still hampered by some of the same issues that left the church in its sorry state during the years it was abandoned.

“The doors have been ripped off three times in a row, and I just had them replaced by a friend of mine at Gleason,” Bill Rebane told Estonian World. “People are using the church as a drop off point for their garbage, that’s the biggest problem right now.”

A pentagram drawn on the church wall

The vandalism against the church has even taken epic proportions. In the summer of 2018, someone threw a large amount of paint on one of the walls of the church. And then a big pentagram was painted on another.

“A little vandalism can be committed by teenagers or drunken parties going on there,” Bill says. “They find it is isolated enough to go out and drink or smoke from the pot. The pentagram and the grand vandalism were on purpose.

“Last year we had visitors there. They appeared out of nowhere, and I had a work crew there at the time, and two people, dressed in black, claimed they were in the area visiting friends. And then they started talking about Islam, how Islam was better than the Christian religion. From there, we didn’t hear anything until the church was totally vandalized. Oil painting on the walls. So we spent a lot of time cleaning that up again and doing it all over again. “

Bill is convinced that this was not local and occasional vandalism, it had to be done on purpose. “A huge pentagram painted on a wall. It seems that it’s in today’s society that we engage in hate and that kind of activity, and religion is kind of going out the window these days, ”sighs. -he.

The grounds of the church and the adjacent cemetery (100 feet behind the church, with some 11 graves, not very visible if you don’t know where to look) is owned by a non-profit organization, the church Estonian evangelical Martin Luther, who is basically Bill Rebane and his family. And Bill has big plans for the church – the only problem is the lack of volunteers to help and the lack of money.

“My plan is to create campsites for people to come and visit, to have natural trails all over the place over there in the woods. I want to make it a special place, because everyone seems to come out of it with some spiritual effect. They find it peaceful and soothing, very conducive to spiritual retreat. I don’t think too many people from the Gleason area will be joining the congregation, ”says Bill.

Last year he bought a 32 foot camping trailer. “It’s beautiful, practically new, with a pop-out, and I was going to put it there for families who would like to spend a weekend there, Estonians from anywhere, or other people to come and visit and be able to rent this and possibly set up a small log cabin for a Baltic information center.

“So the projects are big, we miss the volunteers. And money. The roof – we bought the roof, all the materials are there, but I cannot get insurance on the property because it is not finished. It’s dangerous to send volunteers to the roof and do the roofing because if someone gets hurt, I don’t want to be personally responsible. It would put the church in danger.

“The solution is to attract a contractor who would find in his heart to provide the labor to redo the shingle on the roof,” notes Bill. “Or, we can prepare a letter to Menards or other building material houses to donate. We have to have the money or some other way to pay someone.

But Bill says progress has been made in all areas of the church. “The foundation was the most important thing. You can’t have a new roof and rebuild the church unless you have a solid foundation. It was a big job and mostly a guy did it, a volunteer. I lifted the whole church and put the natural rock below. It will last another hundred years. Now comes the fine finish.

“I finally got all the church windows, which are still there (in Saxon, WI, where Bill lives – editor) because I can’t have a carpenter go over there and put them up. for winter. I just have to find the manpower to do it. It’s the next big chore. Roofing and nature trails is the plan for next spring.

“I found fences, old iron fences, beautiful things. It’s in the Green Bay area. I’m trying to see if I can get it for a decent price that I can afford, personally, and then we could make it harder for people to get in with their vans and throw away their trash, ”Bill hopes.

There was a time when he thought of buying a mobile home and cladding it with half-timbered siding, and moving to live there, next to the church. “But at my age, I wouldn’t want to be there alone. It would be a big mistake, ”says the 82-year-old director.

Renew all the effort

The entire restoration effort is in desperate need of money and volunteers to help do the things Bill himself cannot do. “I think we’ll have a campaign, send letters and renew all the effort. It’s so difficult to bring people in with equipment to do a job, ”he explains.

Bill notes that at the start of the restoration he also contacted the Estonian Embassy in the United States. “They said they couldn’t help the church, but could consider helping to set up some kind of information center there – an Estonian information center. It is still an option. I don’t think we should use the church for the information center, but we could make a typical Estonian log cabin, and at least keep it open on weekends.

If you are interested in visiting the old Estonian Church then this is a five-hour drive (approximately 300 miles) from Chicago, in the middle of Wisconsin. Its approximate coordinates are 45.290607, -89.476676, but Google Maps will also find it under the road name of the Estonian Church or Estonian Cemetery.

Anyone who is interested in donating to the cause, the church website has the option to do this through PayPal.

Cover: Estonian church near Gleason, WI, in the woods. Photo by Sten Hankewitz.