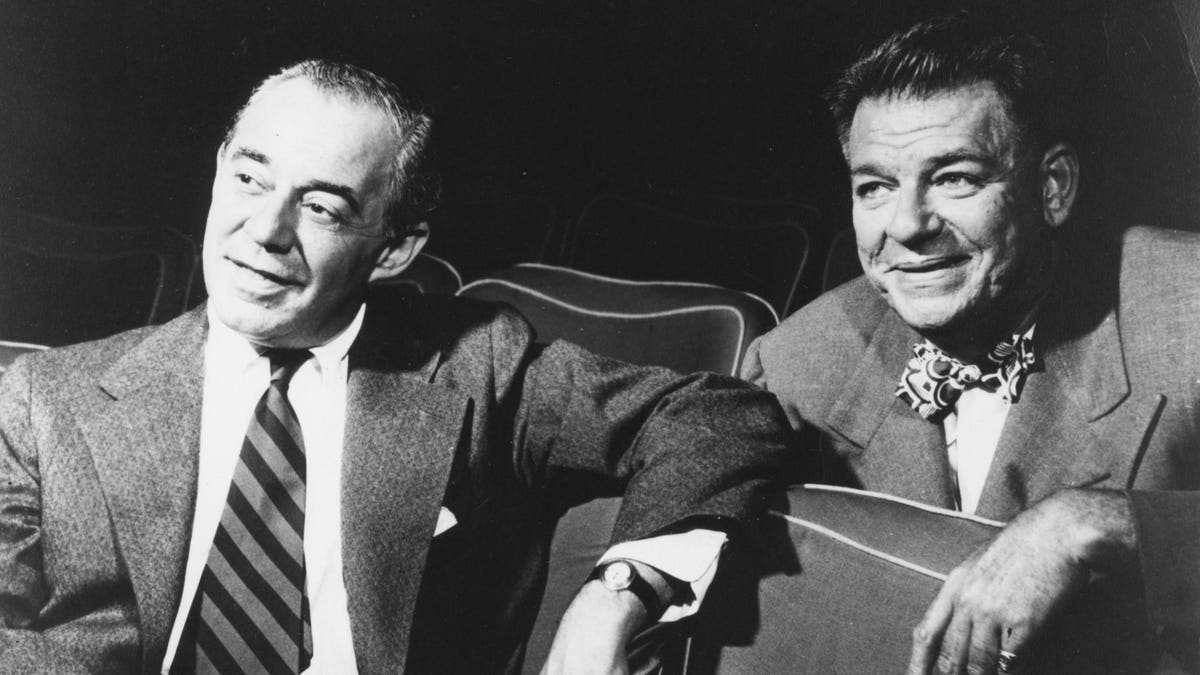 The catalog that includes Broadway classics like Oklahoma! and The Sound of Music still earns serious dough-re-mi.

The music video for the hit single, “7 Rings,” is vintage Ariana Grande. The 27-year-old pop star twerks, poses and prances with a crystal-clad posse around a nightclub-themed house strewn with fur, diamonds and a champagne tower that gets shattered to the floor. It’s a captivating spectacle that’s been viewed on YouTube almost 1 billion times. But at its heart is a song from a much different kind of show and a very different time: the wistful, wholesome 1959 Broadway hit The Sound of Music and the imminently hummable refrain of its signature tune, “My Favorite Things.”

It’s likely that a good number of those 1 billion viewers have no idea who wrote the song that inspired Grande, or even where it comes from. But they most surely can hum its chorus without missing a note, and for that they can thank Richard Rodgers and Oscar Hammerstein. “My Favorite Things” is the most lucrative song from The Sound of Music, the pair’s most successful show.

While the composers died 41 and 60 years ago, respectively, the company that owns that song and 240 others they wrote together has been raking in millions. Not just from The Sound of Music (though five of their top 10 money-making songs are from it) but from 10 other musicals including Oklahoma!, The King and I and South Pacific. Their songs and shows, which collect fees and royalties from local theater groups, companies like Volvo and Frito-Lay that use them in commercials, artists like Grande who repurpose their hooks and music streamers like Spotify and Apple, brought in revenue of  $40 million in 2019.

In fact, they courted it. The duo started a music publishing company in 1943, the same year they wrote Oklahoma!, to monetize their success. Now, nearly 80 years after their first collaboration, their song catalog is worth $350 million, ranking it as the world’s third most valuable, behind John Lennon and Paul McCartney’s Beatles catalog ($500 million) and Michael Jackson’s roster of hits like “Billie Jean” and “Smooth Criminal” ($375 million).

That prescience is still paying off today. The value of music catalogs is at an all-time high,  thanks to a group of investors including Universal Music and Hipgnosis that have paid top dollar for the rights to popular songs that churn out a steady flow of payments from streaming, film use and marketing campaigns. They’ve found a willing group of sellers, as artists look for ways to preserve their legacies and cash in, particularly now before getting hit with any potential tax increases that may be coming under the new administration. Bob Dylan sold his life’s work for an estimated $325 million in December. Paul Simon sold his for $250 million in March. In between were headline sales from Neil Young, Shakira and Ryan Tedder, all of them driving up the value of popular catalogs to record highs.

Thanks to a timeless appeal and a robust business licensing their library of musicals, the Rodgers and Hammerstein catalog is worth more than all of those that were recently sold as well as  those of such celebrity musicians as Elton John and his longtime writing partner Bernie Taupin, Taylor Swift, Bruce Springsteen, Stevie Wonder or Billy Joel, all of whose catalogs are estimated to be among the 10 most valuable in world.

The musical maestros’ legacy got a boost from Grande’s hit in 2019, but sources say it likely averages more than $33 million a year, dwarfing the estimated $14 million Bob Dylan’s music brings in. Those kinds of numbers also stand out among their 1940s-era peers — Cole Porter and Irving Berlin — and the other creators of the so-called Great American Songbook. Certainly, hits like Berlin’s “White Christmas” and Porter’s “I Get a Kick Out of You” are still popular, but their success is more modest in comparison to that of Rodgers and Hammerstein, who had six of their 11 musicals become huge hits.

After working together for 17 years, the fruitful Rodgers and Hammerstein partnership came to an end with Hammerstein’s death in 1960, but Rodgers participated in the business for the remaining two decades of his life. In a story told to American Heritage in 1990, Rodgers once received a cast album from a group of plucky high schoolers who wanted to share their performance of Oklahoma!, his first musical with Hammerstein. The composer sent a perfunctory note of praise and well wishes. Behind the scenes, his attorney issued a cease and desist order warning them of legal action if they continued to distribute the recording.

After Rodgers died in 1979, the business remained in the hands of the families even as it evolved. Renamed the Rodgers & Hammerstein Organization in 1990, the company cut deals to manage the rights for shows like Footloose and In the Heights and expanded the catalog’s use in commercials, film and television. In 1997, it brought a groundbreaking adaptation of Cinderella to ABC starring Brandy and Whitney Houston.

“These pieces are rather brilliantly constructed and can withstand a lot of interpretation,” says Ted Chapin, who oversaw the catalog for four decades before retiring this year. “So we just kept moving forward.”

The business’s ability to stay relevant made it attractive to buyers, and the families sold the company to Dutch music publisher Imagem for a reported $200 million in 2009. Eight years later, independent music publisher and record label Concord reportedly paid $600 million for all of Imagem.

“When men and women were writing Broadway shows way back in the day, no one ever knew there was going to be a life for them later,” says Bill Gaden, president of Concord Theatricals. But because Rodgers and Hammerstein centralized their IP from the beginning, there are now countless ways to make money from them. “We own our music publishing rights, we own our theatrical rights, we own the movie rights and the remake rights and the sequel rights. It’s really quite astounding.”

That kind of range also requires a lot of management. While some publishing catalogs just sit there and rack up royalties from music streaming, Concord’s theatricals department has 90 employees that have a hand in overseeing the Rodgers and Hammerstein catalog. During a typical year, 1,200 of their musicals are performed across the country, and Concord gets a cut of every one of them. In 2019, there were 161 productions of Oklahoma! in North America, including a buzzy, transgressive Broadway revival that grossed more than $22 million. The show is also being adapted into a gritty television series in the mold of Friday Night Lights or Bloodline by Skydance TV.

For such a top-flight show, Concord collects 14% of box office sales. Less popular titles (Me and Juliet, anyone?) can be licensed for a bargain 10% fee. “My Favorite Things” may just be the most perfect song ever written for selling stuff, but the catalog offers endless options for marketers. “Getting to Know You” has been used to make tech companies like 23 and Me and Airbnb seem just so darn friendly. “Oh, What a Beautiful Mornin’” has been used in ads to sell everything from Samsung televisions to Coors Light.

Last year, during the height of the pandemic, celebrities, politicians and marketers grabbed hold of “You’ll Never Walk Alone,” a somber ballad of resilience from the second act of Carousel. The 76-year-old song suddenly began surfacing on social media with renditions from local choirs to superstars like Barbra Streisand and Andrea Bocelli. By the fall, Johnnie Walker used the song in a commercial spot that featured a crooning, gospel-infused Brittany Howard.

And if it weren’t for the ever-changing copyright laws that determine the long-term value of creative work, the Rodgers and Hammerstein catalog would likely be worth a lot more. Under current copyright law, works created before 1978 have 95 years before they enter the public domain, which means The Sound of Music, which debuted in 1959, has a good three decades left. Earlier shows are coming up against the clock. Carousel expires in 2040; The King and I in 2046. Oklahoma!, the duo’s first collaboration, has only 18 years left, meaning that by 2039, using “Oh, What a Beautiful Mornin’” won’t cost a dime.

Here are the five most valuable music publishing catalogs, according to experts in the industry.

The thirteen studio albums The Beatles released between 1963 and 1970 remain the gold standard of rock and roll; the vast majority of them were written by Lennon (d. 1980) and McCartney. Initially, they each owned a minority stake in the publishing company managing their rights, but the company was sold out from under them in 1969, and they ended up selling their remaining shares. The loss of those rights would be a chip on McCartney’s shoulder for decades; he even advised a young Michael Jackson to hold on to his own publishing rights (a decision he would come to regret when Jackson bought McCartney’s Beatles credits in 1985). McCartney sued Sony/ATV (now Sony Music Publishing) in 2017 for control of the catalog and reached a confidential settlement.

With more than 26 million monthly listeners on Spotify, Jackson (d. 2009) still streams like a pop star. Like Rodgers and Hammerstein, he consolidated his copyrights for hits like “Billie Jean,” “Beat It” and “The Way You Make Me Feel” in a music publishing company, Mijac Music. For a time, Mijac owned the ATV songwriting catalog, which held Lennon and McCartney’s work. Sony bought a 50% stake in ATV in 50%, and bought the remaining stake from Mijac in 2018. Mijac still owns songs by Aretha Franklin and Elvis Presley, but the King of Pop’s own tunes still generate the most publishing revenue at nearly $20 million a year.

Rodgers and Hammerstein’s songbook is immensely valuable even six decades after their last Broadway hit. In 2019, their catalog brought in $40 million in revenue thanks to more than 1,200 local productions of their musicals, a splashy Broadway revival of Oklahoma! and a reported 90% ownership of the publishing rights for Ariana Grande’s “7 Rings,” which is based on “My Favorite Things,” from The Sound of Music. While the clock may be ticking on their works from the 1940s, catalog owner Concord is squeezing out every last drop, licensing Oklahoma! for an adaptation by Skydance TV.

Dylan dominated headlines in December when he sold his song catalog to Universal Music in a blockbuster deal reported to be worth more than $300 million; Forbes estimates the price tag was $325 million. The folk-rock legend always wrote alone and had kept intact the rights to his collection of more than 600 songs, including standards like “Blowin in the Wind” and “The Times They Are a-Changin’” that get covered over and over again.

Simon joined the great catalog cash-in this March, selling his songbook to Sony Music Publishing for an estimated $250 million. In addition to his superstar solo career, during which he wrote chart-topping albums like Graceland and Rhythm Of the Saints, he was the sole songwriter for Simon & Garfunkel. He penned hits like “Bridge Over Troubled Water” and “The Sound of Silence.” Simon also has not shied away from monetizing his music, writing the soundtrack for The Graduate in 1967 and licensing his tunes for Volkswagon and Coldwell Banker commercials.

Methodology: The valuations are Forbes estimates based on conversations with experts across the music industry. Figures for catalogs with multiple writers refer only to the songs they created together, not the totality of each individual’s work, and reflect full value of writer and publisher shares, which not all songwriters own outright.