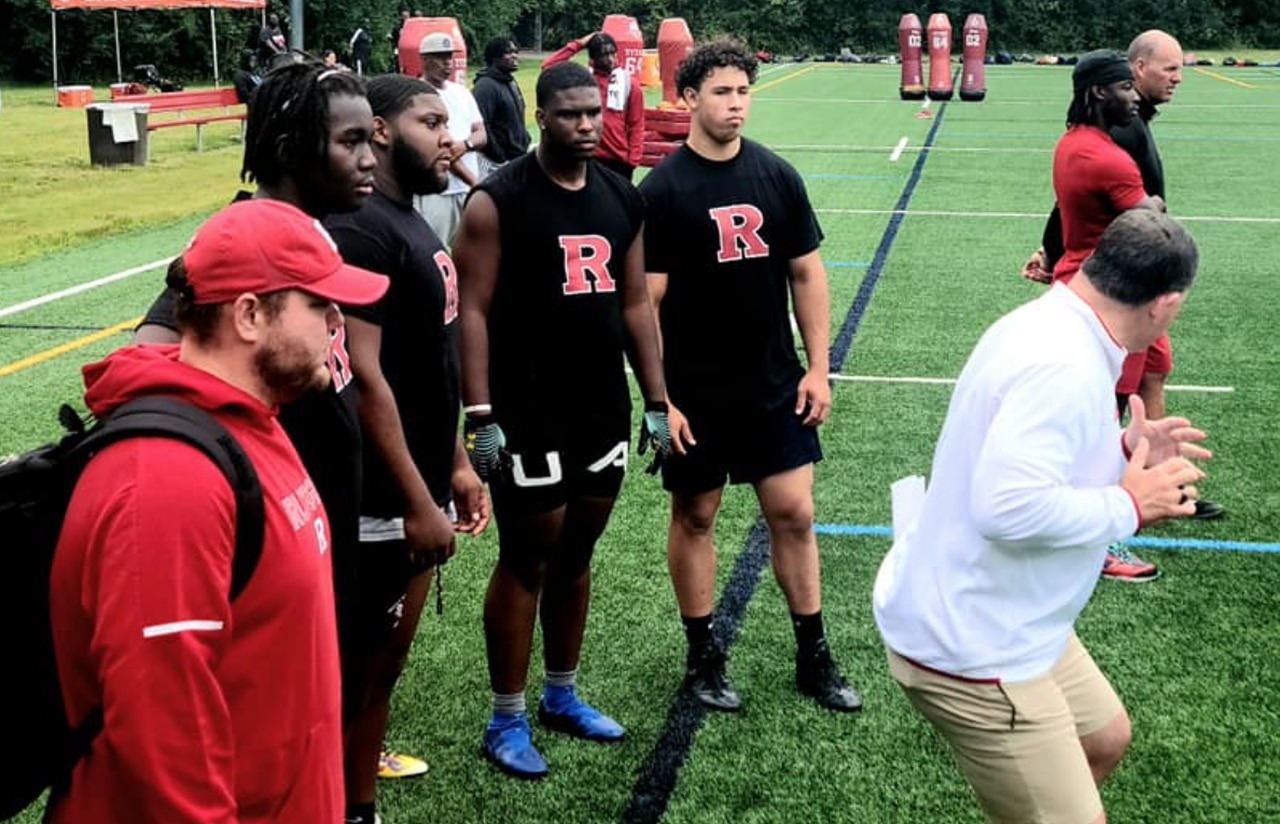 Rutgers hosted a few hundred campers on Saturday for Chop 23, a football camp for rookies entering their freshman year of high school. There was talent in abundance, especially along the defensive line. The recruits were measured, tested, drilled, and faced off one-on-one. Here are a few rookies who stood out throughout the four-hour event, many of whom already have offers from Greg Schiano and staff.

Chase Bisontis (6-5, 290) OL, Don Bosco (Ramsey, New Jersey): Bisontis displayed elite quick footing and athleticism throughout the exercise portion of the day. He started off slowly one-on-one but began to dominate his advantage once coached by Schiano and Rutgers offensive line coach Andrew Aurich between repetitions, which kept him looking ahead and to slide his feet more efficiently. His heavy hands and disarming strike hit his defensive counterparts that day. Bisontis is New Jersey’s second junior in NJ.com’s new Top 50 and has a nationwide list of offers, starting with Rutgers in the state.

Eric King (6-3, 312) OL / DL, preparation of Saint-Pierre (Jersey City, New Jersey): King is powerful, patient, and has good anticipation, good footwork, and good balance. He plays with patient hands and never looks in a rush. King effortlessly glides his feet to cut corners, then anchors himself with power and strong hands. He’s put more kids in the ground than any other lineman in the camp, showing off brute strength, although he’s recently started weight training. King took the majority of his representatives inside the guard, where he dominated.

Jabriel Masse (5-9, 165) RB, Continental Region (Linwood, New Jersey): Rutgers offered Mace last August and he showed why on Saturday. He was one of the most athletic and talented full-backs in the camp, showcasing his build, speed, vision and playing on the pitch. West Virginia and Syracuse also donated.

Kyree Butler (6-0, 325) DT, Upper Dublin (Fort Washington, Pennsylvania): Butler is built in the mold of former St. Augustine defensive tackle Isaiah Raikes – now at Texas A&M – and brings similar athleticism. He’s a big dancing bear, which at 6 feet, 325 pounds can bend and is a load inside. Not only is he a wrecking ball, he’s flexible, plays with leverage and technique, and can descend blocks with active hands and tilted shoulders.

James Heard Jr. (6-2, 210) Edge, Saint-Joseph (Philadelphia, Pennsylvania): Heard has an elite cadre, supported by a tough and explosive bottom half. He is fast, athletic and has developed his hands and technique during the offseason. He didn’t do a lot of reps but when he did, he usually set up his counterparts and beat them with speed and precision.

DJ Samuels (6-0, 240) Edge, Catholic Bergen (Oradell, New Jersey): Samuels continued his streak of strong performances at camp at Rutgers. He worked both outdoors and indoors, winning most of his reps with a quick descent, an ability to turn speed into power, and a huge assortment of rushing moves.

Luc Henrich (6-1, 215) QB, Saint-Joseph (Montvale, New Jersey): The Luke Henrich era began in Montvale. The rising junior threw the ball with good touch, speed and precision throughout the day and threw the most touchdown passes of any competitor throughout the day, predicting a solid year in the air for the Knights, already a behemoth of the Far North.

Christian garrett (6-4, 190) DB, Académie Sainte-France: Garrett is a tall athletic defensive back with good feet and good movement skills for such a tall player. He is projecting himself safe or could become a linebacker or an outside edge where his athleticism would be off the charts. But, for now, he’s using his length and recovering ability to harass receivers on the pitch.

JaSire Peterson (6-3, 275) (Rutgers commits) OL, Union City (NJ): Peterson has an athletic frame, upside down and had mixed results on Saturday. He was one of the most athletic linemen on drills and was hot and cold on one-on-one guard. He showed heart and improved throughout what appeared to be dozens of reps, as defensive line coach Jim Panagos kept the campers competing, separating the men from the boys. Peterson continued to jump and improved throughout the day, showing the courage it will take to become a factor in the Big Ten. Peterson plans better to center or keep.

Josias Griffin (6-4, 230) DL, central (Springfield, Mass.): Griffin has the tools to become an elite rookie – good length, lightning first step, big turn, and he rushes the passer with a plan. He regularly ate lunch for opposing linemen at camp. Regardless of whether he was on the inside or the outside, Griffin displayed peak passing ability and is expected to enter college as a more complete player than most linemen in the region.

Dashawn womack (6-4, 230) DL, Académie Sainte-Frances (Baltimore, Maryland): Like Griffin, Womack has a similar build and is a great talent. He’s long, explosive, comes out of the ball, can bend, finish and has good hands. He also has an array of rushing moves and one-on-one winning ways, from inside and out, although he’s just entered his freshman year. Womack was one of the more polished campers along the defensive line and is expected to come up with double-digit offers once his frame fills up. Boston College has offered so far.

Donovan McKoy (6-4, 190) WR, Saint-Joseph (Montvale, NJ): McCoy is massive and has an elite cadre. He will likely become a tight end, as he’s long and has a thick bottom half to accompany his ball skills and ability to follow the ball through the air. He uses his large frame to win 50 to 50 balls on the field and boxes linebackers and smaller DBs to catch balls in traffic. He also plays basketball, where he stands out who can play around the rim, defend and score three points.

Cadin Olsen (6-5, 205) QB, Armstrong (Kittanning, Pennsylvania): Olsen has been in contact with various schools, all of which seem to be on the verge of offering. Although he left Rutgers without one, Olsen was one of the most successful quarterbacks in the camp, showcasing his strong arm and ability to deal with things quickly. He’s got a big build, good mechanics, is productive, and has a good attitude, which should get him paying dirt soon.

Rutgers went on to welcome the region’s top sophomores on Sunday, some of whom have won offers following strong performances at the Rutgers intramural pitches.

Jaylen mcclain (6-1, 175) 2024 DB, preparation of Seton Hall (West Orange, NJ): McClain is a fluid, physical and athletic locking DB, well beyond his years, which has led Greg Schiano to join his tender choir, which also includes Ole Miss, Syracuse, Temple and UMass. And he’s just as scary, if not more, with the ball in his hands. McClain’s dad played the defensive back for the Orange.

Thank you for relying on us to provide you with journalism you can trust. Please consider supporting NJ.com with a subscription.

Todderick Hunt can be reached at [email protected].