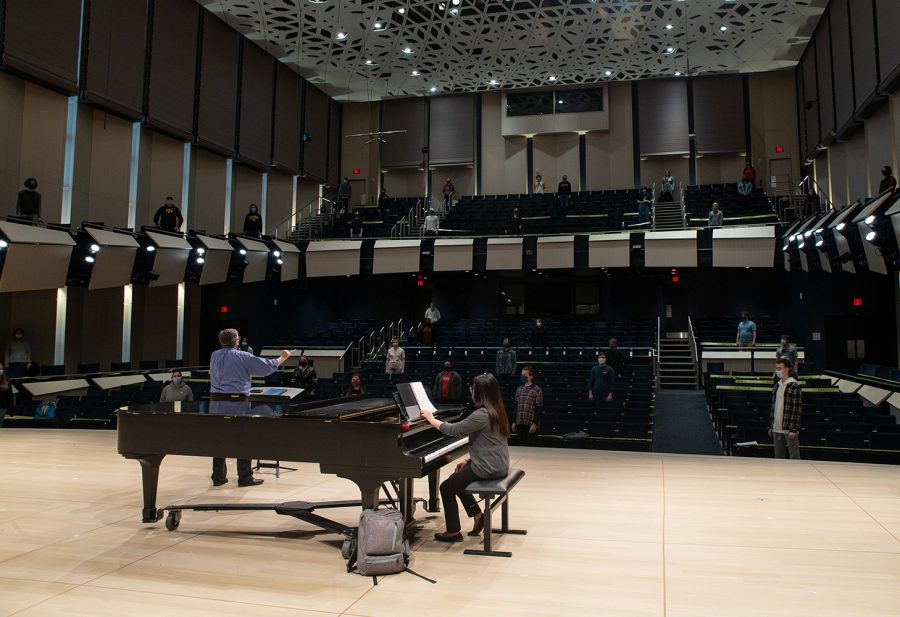 One year ago, students within the University of Iowa School of Music performed concerts for live audiences. Now, they’re performing for cameras.

After UI classes shifted online in March 2020, virtual instruction proved particularly challenging for the performing arts. To combat this obstacle and ensure the same level of education, the School of Music made it a priority to provide in-person instruction throughout the 2020-21 academic year. Strict social distancing and sanitation protocols allow for in-person learning to function safely.

Director of Bands Mark Heidel said the unpredictability of COVID-19 made it difficult to prepare for a virtual semester.

“Like the entire university, we had to pivot quickly,” Heidel said. “Part of the problem was, for a period of time, we didn’t know if we were coming back, so what we did in the band area was create a series of projects they could choose from to complete at home.”

David Puderbaugh, associate director of choral activities, detailed a similar shift in instruction with the choirs from the School of Music.

“The choirs basically became non-singing ensembles. We moved it to more of an academic form, taking the music we’d been working on, having discussions on the music, lecturing about the music, and assigning readings connected to the music,” he said. “If we weren’t going to be able to perform, we had to do something to finish out the semester that was somehow connected to our original mission.”

Music stopped last spring. As scientists and medical professionals learned more about the coronavirus, it became apparent that instruction would not return to normal in the fall. School of Music Director Tammie Walker said the school used the summer to learn and prepare for the fall semester to provide the best instruction for students.

“We used summer to really educate ourselves and acquire the technology that we needed in the building and in people’s private studios to be able to really do this well,” Walker said. “We were really adamant that we wanted to find a safe way to continue as much live music-making in-person as we could.”

Other universities, such as the University of Wisconsin, are not holding live ensemble rehearsals for any performance groups other than stringed instruments. According to the Mead Witter School of Music’s website, all choral ensembles for this spring semester were canceled. Other schools in the Big Ten Conference have implemented hybrid models or limited live music rehearsals with protocols similar to the UI.

The School of Music worked with medical professionals, scientists, and UI Facilities Management to study airflow patterns in Voxman Music Building to determine which spaces were safe for students to rehearse in. The school designated areas that were approved safe for aerosol music-making, including the concert hall and the recital hall, non-aerosol music-making, such as certain practice rooms, and noted which spaces the school couldn’t use at all under the current circumstances.

School of Music COVID-19 guidelines specify that any musicians or vocalists producing aerosols must be at least 12 feet apart. This spacing restraint severely limits the number of places within Voxman where ensembles can rehearse, because very few have the space required for that level of social distancing, according to a data sheet sent to The Daily Iowan.

The primary rooms being used for aerosol-producing ensembles are the recital hall and concert hall. The recital hall, which had a pre-COVID-19 capacity of 200 people, now safely holds 50 people. The concert hall also has a COVID-19 capacity of 50 people, even though its pre-pandemic capacity was 700. Both spaces take up more than 2,000 square feet, making it possible for small aerosol-producing groups to maintain a safe distance while playing.

“We worked with a really incredible team here on the University of Iowa campus to come up with our protocols and to come up with those safety regulations,” Walker said. “We worked with medical doctors and we worked with bioaerosol scientists and engineers and facilities management to determine how airflow was happening in each of those spaces and what the maximum safety would be.”

Requirements dictate how long an ensemble can rehearse, limits on the number of people in each ensemble, and sanitation protocols for before and after each rehearsal. Groups can only rehearse for 30 minutes at a time in approved spaces. Afterward, the space must sit empty for an additional 30 minutes while the air recirculates before another rehearsal group can enter.

Orchestra ensembles split into smaller groups to meet COVID-19 guidelines. Interim Director of Orchestral Studies William LaRue Jones said the symphony orchestra divided into three groups of about 14 players. Occasionally, wind instruments are added to the ensembles to fit the repertoire, he said.

“The winds are spread further apart, we actually give the winds 12 feet, and wind players have mutes on the bells of their instruments,” Jones said, referencing the covers used to prevent some of the aerosols from entering the air.

Sound is impacted by the covers, but they also stop particles from entering the air without greatly impacting sound quality.

A 2021 study by the University of Minnesota College of Science and Engineering concluded that a single-layer mask stopped 60 percent of particles without reducing too much sound quality from the instrument. It also concluded that at 10 centimeters away from the instrument outlet, the aerosol concentration was less than 10 percent of what it was at the source, and none of the 10 instruments studied showed an appreciable influence of flow beyond 30 centimeters. This data led to a conclusion in the study that aerosols were rising vertically instead of horizontally.

“Most of the instruments use bell covers,” Heidel said. “The university purchased covers for those instruments. It’s a high-grade nylon cover that was made specifically for instruments during the COVID-19 pandemic.”

Walker and School of Music professors noted that the school has also implemented a volunteer testing program, run out of UI Professor Val Sheffield’s lab, for students participating in live ensembles.

Director of Choral Activities Timothy Stalter said there are several students in each ensemble participating in the program.

Walker and Heidel both said the testing program produced only negative COVID-19 results so far for tested students.

“What’s nice is that we have not had, to our knowledge, a case of COVID that is a result of the live music rehearsals,” Heidel said.

The restrictions also caused some classes to function more like private lessons. Director of Opera Bill Theisen shifted toward individual instruction instead of group workshops because of the restrictions on the number of singers he can have in a room.

“They choose a song or an aria that they work on with a vocal coach,” Theisen said. “After they’ve worked on the music, then they come to me and we talk about the song dramatically or comedically and get it ready for them to perform as part of an audition, or as part of a recital.”

Other vocal ensembles have met similar challenges. During the fall 2020 semester, all four choral ensembles were held virtually because of the large number of COVID-19 cases on campus. This semester, the University Choir and the Kantorei are holding live rehearsals, but the Women’s Chorale and the Camerata continue to function as virtual choirs.

Singing during COVID-19 has been under particular scrutiny because of a major outbreak that occurred in a choral group in Washington state a year ago. The group didn’t implement social distancing or mask procedures and 52 of the 60 members there became ill. Two people in the group later died from the virus.

Students rehearsing and performing in live choirs at the UI have adhered to the 12-foot distancing rule and are masked at all times.

Brandon Burkhardt, an undergraduate member of the Kantorei chamber choir, said he’s happy choir is back partially in person, lamenting the difficulty of creating a community in an online choir.

“The music department as a whole, but especially the choirs, each are their own family. It kind of felt like the same family you had when everyone was being quarantined and you couldn’t see your extended family,” Burkhardt said. “It was that same feeling of ‘I can’t see my music family now.’ It was weird because we looked forward to the Zooms that we had together because it was the only chance we had to see them. I think everyone in the choir is incredibly grateful to be back the way we are.”

Having singers 12 feet apart instead of shoulder to shoulder isn’t ideal, but Stalter noted that it made his students less reliant on each other and more sure of themselves.

“I think that, in a lot of ways, there are some real pros that have come out of this — there’s nothing positive about the pandemic, of course,” Stalter said. “The fact that we are separated so much in terms of when we rehearse and perform has caused students to be more independent and less reliant on someone standing right next to them or right behind them.”

Puderbaugh added that having two virtual choirs gave students the ability to continue to participate in an ensemble, even if they were uncomfortable with in-person instruction.

“Virtual choirs have been a new thing for everybody, but it has given us that option for people who have health concerns or who are uncomfortable that we could move them to a completely virtual format,” Puderbaugh said.

Ensemble participation is a requirement for most music majors, but any student with a Temporary Alternative Learning Arrangement (TALA) can opt-out of an in-person ensemble and work with their conductor to fulfill the requirement in a different way, Walker said. For band and orchestra, students with TALAs are completing independent studies, and choir students participate in one of the two virtual choirs instead of attending live rehearsals.

Performances also look very different this school year. With no live audiences allowed for concerts at Voxman, ensembles pre-record their performances to stream through the School of Music website at a later date.

Heidel explained that, while concerts are virtual, the school is still trying to create a similar performance experience for students. Students still dress up in concert attire and perform as if an audience was present and the school ties the recordings together to create a full concert.

The new performance protocols have particularly affected the Jazz Department. UI Director of Jazz Studies Damani Phillips said that UI jazz ensembles frequently played in venues outside of the Voxman Music Building before protocols were put in place and they no longer have that opportunity for alternative performance experiences.

“We usually are a program that plays outside the university. In keeping with the culture and the customs of jazz music to not be necessarily played in formal concert spaces like the concert hall or recital hall, it’s meant to be played out and about amongst people,” Phillips said. “That’s a valuable experience but unfortunately that all had to come to a close.”

While these outside opportunities have been canceled until it is safe to reinstate them, Associate Professor of Instruction in jazz James Dreier noted that there have been some positives to virtual performances.

“One of the silver linings has been the live video feeds of the concerts,” Dreier said. “Now, people from literally all over the world can watch a concert, and you know that’s not just for jazz, that’s for all of the ensembles. That has put a lot of pressure on our audio-visual department, but they’ve really stepped up and done a fantastic job.”

Heidel said the UI School of Music has, however, been a leader for other universities in providing protocols that will keep professors and students safe, while still allowing for live music-making to occur.

“We were one of the national leaders in getting established protocols out early and many institutions around the country were referring to the protocols that we developed to help guide their own program,” Heidel said. “I was really proud that Iowa was at the forefront of dealing with this challenge.”