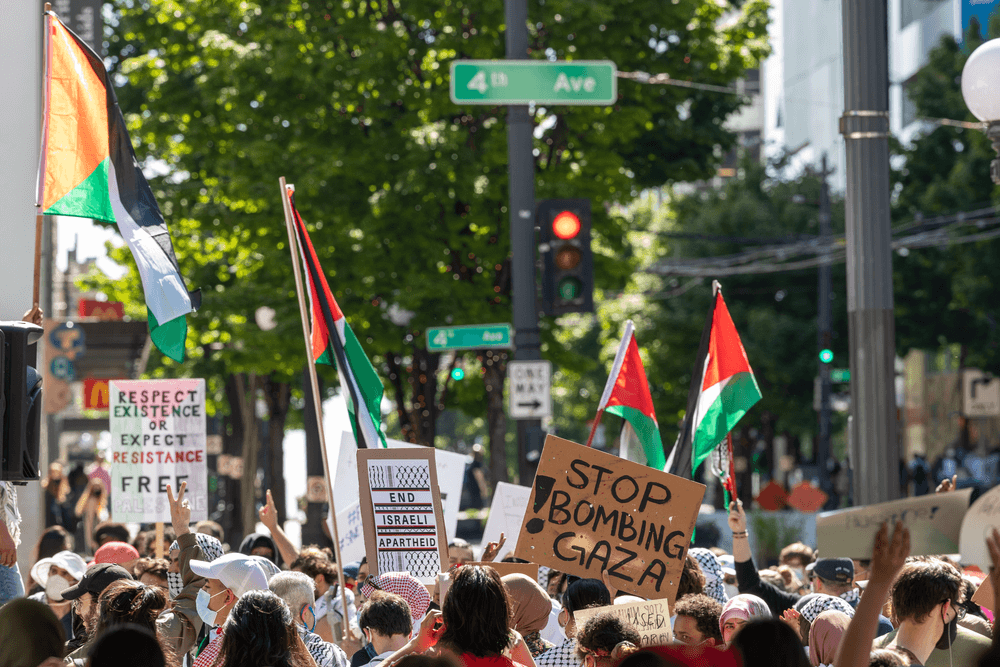 The imminent threat of eviction of six Palestinian families in the Sheikh Jarrah neighborhood of East Jerusalem – and the interruption by the Israeli police of a Ramadan celebration at the Al-Aqsa Mosque in Jerusalem – sparked a resumption of the large-scale violence in the Middle East earlier this year. month, the first major violent struggle between Israeli and Palestinian forces since the Gaza war in 2014.

According to estimates by medical authorities in Gaza, Israeli airstrikes killed 248 Palestinians; other medics estimated that Hamas rockets killed 13 Israelis before the two sides agreed to a cease-fire May 21.

The Israeli occupation and Palestinian resistance dates back decades, but Americans are increasingly sympathetic to Palestine. While a February 2021 Gallup poll found that most Americans still want the US government to pressure Palestine to resolve the violence, a record 34% of Americans – and the majority of Democrats – said the United States should stress Israel’s responsibility. Several Democrats in Congress recently staggered their positions on Israel, pressuring President Joe Biden to firmly denounce Israel’s tactics. In the media, Last week tonight with John Oliver started a recent episode with a segment addressing US officials for supporting “war crimes” by funding Israel’s military budget.

“One party has suffered more than ten times the number of casualties,” Oliver said in his introduction, “something that speaks to both the serious power imbalance at play here and how this is often obscured by the way which we choose to talk about “.

As American public opinion begins to shift, some religious and academic leaders see an opportunity for American Christians to increase their support for Palestinian human rights and condemn the Israeli occupation.

Some evangelicals support Israeli settlements and the displacement of Palestinians because they believe that the return of the Jewish people to Israel is a necessary part of God’s plan for the return of Christ – a belief known as Christian Zionism. Former President Donald Trump’s support for Israel, including his recognition of Jerusalem as the capital of Israel, was born from a explicit desire to please his evangelical base.

“[U.S. Christians] all have an obligation to support and uplift this community, in the face of so many difficulties, in particular because of the very brutal Israeli military occupation of the occupied Palestinian territories, ”he said.

Other Christians have long opposed US funding for the IDF.

“For nearly 150 years, Quakers maintained close ties and relationships with people living in what is now Israel and the Occupied Palestinian Territories,” Diane Randall, general secretary of the Committee of Friends on National Law, an organization Quaker lobbying, said in a recent statement calling on the Biden administration and Congress to “publicly censor Israel for its violent expulsions of Palestinians and its illegal expansion of Jewish settlements in the occupied Palestinian territories”.

Over the past two decades, major Protestant denominations, including Presbyterian Church (United States) and the United Methodist Church, made statements against the Israeli occupation; more conservative names, such as Southern Baptist Convention, have historically stood alongside Israel. In 2015, The United Church of Christ joined the Presbyterian Church (USA) in voting for strip companies which “profited from the occupation of the Palestinian territories by the State of Israel”. And the Reverend Michael Curry, Presiding Bishop of The Episcopal Church, issued a declaration on May 13, declaring that “the expansion of Israeli settlements at the expense of Palestinian families must stop.”

Roger Baumann, assistant professor of sociology at Hope College and specialist in race, religion and transnational solidarities, noted that American Christians have always had a range of views on the Israeli occupation, but he sees the potential. of greater American Christian solidarity with the Palestinians.

“What is perhaps happening among American Christians, however, is that the vocabulary of racial justice is increasingly finding its place in conversations about Israel and Palestine on a larger scale,” he said. he told Sojourners in an email. “The conversation is moving increasingly from the theologies of Bible prophecy and ‘end times’, which have traditionally dominated conservative American Protestant and Evangelical perspectives on Israel, to theologies of liberation, racial justice and solidarity with the oppressed.

Like Joyce Ajlouny, the US-Palestinian Secretary General of the American Friends Service Committee, and Reverend Mae Elise Cannon of Churches for Middle East Peace recently wrote for Sojourners, the current focus on violence is an opportunity for radical change for American Christians – moving from covert support or mere declarations to the encouragement of public solidarity with Palestine.

“Christians and people of all faith traditions must play a greater role in calling for a just and lasting peace based on the achievement of equality for Palestinians and an end to human rights violations. It is also the path to a more secure and peaceful future for the Israelis, ”Ajlouny and Cannon wrote.

Atshan and Baumann both credited the protests against police violence in 2020 and the discussions that followed on militarization, violence and justice with growing U.S. sympathy for the Palestinians. Atshan pointed out that the leaders and thinkers of the black movement – from James baldwin and Angela Davis to the black lives protests that began in Ferguson, Missouri, in 2014, and the current work of reporters like Marc Lamont Hill – included Palestinian rights in their activism. Baumann echoed this and highlighted the 2015 Declaration of Solidarity “Black For Palestine”, which has been signed by nearly 50 organizations and over a thousand people.

“As black American activists are increasingly heard and amplified, so is this message about the links between national contexts and the importance of recognizing the global reach of anti-racist activism beyond national borders.” , Baumann said. “Although expressed in new terms … this global vision builds on long-standing traditions of black political internationalism and nationalism. In 1967 [Martin Luther King Jr.] described “the triple evils of racism, economic exploitation and militarism” as a multi-faceted problem for racial justice, and recent articulations of global solidarities fit into this tradition.

“[2020] was a critical and pivotal moment when the BLM platform was so clear and unequivocal in its articulation of the intersecting struggles that bind black and Palestinian populations, including the global military-industrial complex, the global prison industrial complex, including including American police forces from all over the United States being trained in Israel… These parallels are absolutely undeniable, ”Atshan said. “We recognize that there are critical distinctions in our context, our histories, our struggles, but there are also these overwhelming intersection points.”

Atshan, who is from Palestine and still has family in the country, said that despite the “truly heartbreaking… absolutely devastating” violence, the shifting conversation in the United States was cause for hope.

“I think our movement has truly reached a critical point and a turning point where we are witnessing a real shift in the discourse on Palestine in the United States, and people are opening their hearts and minds to the humanity of the Palestinians.” , did he declare. “I truly believe we are at a watershed moment, and I believe our movement will only continue to grow and gain momentum from here on out.”

Editor’s Note: This article was updated on June 4 at 5:20 p.m. to correct the opening sentence. Sheikh Jarrah’s six families have yet to be evicted.